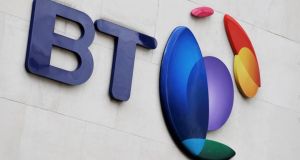 BT Group reported a 35 per cent sales jump after the acquisition of wireless carrier EE, and cited strong demand for the broadband network it is negotiating to maintain control of with British regulators.

Adjusted revenue advanced to £5.78 billion (€6.9 billion) in the three months ended June 30th, the London-based company said in a statement on Thursday.

Adjusted earnings before interest, taxes, depreciation and amortisation rose 25 per cent to £1.82 billion.

1 Irish companies restrict travel over coronavirus fears
2 Suspicions rife as key Brexit trade talks begin in Brussels
3 Bogus notion that supply will cure our housing woes
4 Life as a Facebook moderator: ‘People are awful. This is what my job has taught me’
5 Flight attendant seeks High Court injunction against Aer Lingus
Real news has value SUBSCRIBE