Rural broadband hits another obstacle as Eir pulls out of process 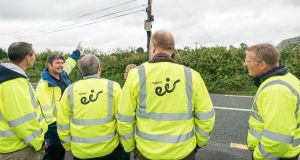 The single biggest question hanging over Eir’s sudden departure from the Government’s broadband process is who pulled the plug, effectively turning the National Broadband Plan (NBP) into an uncompetitive, one-horse race – and why? One intriguing possibility emerging last night focused on the group’s incoming owner.

Xavier Niel, the French telecoms mogul behind the two companies – Iliad and NJJ – acquiring a controlling 64.5 per cent stake in the former semi-State, is a decidedly urban-focused businessman. His modus operandi to date has been building fibre broadband networks in high-density urban areas across France.

One look at the complex tapestry of one-off housing in rural housing and level of investment involved bridging Ireland’s broadband divide might have spooked him.

With Niel’s companies formally taking over in March, did he really want to be announcing the company’s exit from the State’s most important communications project on his first day?

Of course, Eir rejects this as idle speculation, and in its statement yesterday it highlighted “growing uncertainty on a range of regulatory and pricing issues” as the primary trigger for exiting. What this boils down to is the price Eir charges other operators for access to the poles and ducts across the network, which the winner of the National Broadband Plan tender is likely to have to utilise to get at the 542,000 homes earmarked for the plan.

The Department of Communications is understood to be unhappy with the current suite of regulated prices Eir charges for access and, as part of the NBP, requested the company to discount. But so far Eir has resisted.

Have your say: How does poor broadband affect you?

The outcome of this tussle will have a significant bearing on the level of subsidy the Government, and by extension the taxpayer, will have to cough up.

Either way, Eir’s departure renders the Government’s procurement process uncompetitive, a scenario that might prompt a recalibrated tender process.

Minister for Communications Denis Naughten denied the Government had backed itself into a cul-de-sac, insisting it could walk away if the price and the plan offered by the sole remaining bidder – the consortium led by telecoms firm Enet and energy group SSE – was not right.

“It’s not a case that in relation to pricing we’re over a barrel by any manner or means,” he said, even insisting the plan may now be accelerated with just one party to negotiate with.

However, the political fallout from halting the process or switching to a different plan at this late stage could be massive, maybe even enough to collapse the Coalition if the entire scheme unravels. Naughten and Enet-SSE will hardly be unaware of this when the haggling over price begins in earnest.

At the outset of the project, most experts saw it as a straight shootout between Eir and rivals Siro, a joint venture between the ESB and Vodafone. They had financial clout and technical infrastructure to do it.

Now, neither is involved and the process has delivered up only one possible winner. The focus will naturally shift to the capacity of Enet-SSE to deliver.

Enet is rapidly building out its fledgling network but it is nowhere near the size of the other two. However, it can claim to have the backing of Granahan McCourt Capital, which is investing hundreds of millions of euro in EU telecoms projects.

The bottom line? This latest twist in the Government’s long-running broadband saga provides nothing in the way of certainty for those homes and business still waiting for decent connectivity a full seven years after the plan was first mooted back in 2011.