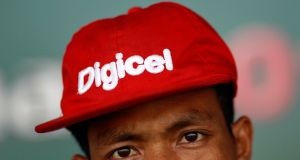 Digicel plan to become the first telecoms operator to block ads of the biggest internet giants such as Google and Facebook across its network. Photograph: Soe Zeya Tun/Reuters

Digicel’s plan to become the first telecoms operator to block ads of the biggest internet giants such as Google and Facebook across its network has hit a stumbling block.

An umbrella group for telecoms regulators across several of Digicel’s markets has warned the company not to roll out ad-blocking software, suggesting it could be illegal and a breach of its licence.

Denis O’Brien, Digicel’s founder, gained global attention in September when he said he was “taking a stand” against the big publishers of web ads, name-checking Google, Yahoo and Facebook .

He is angry that they generate revenue off the back of usage of Digicel’s network without paying his company a fee.

Ectel, which covers a network of smaller nation states such as Antigua, wrote to five Digicel country managers last week with a warning. It said the rollout of ad-blocking software by an operator breached the concept of “net neutrality”.

It said net neutrality meant “service providers should treat all data on the internet the same, not intercepting, interrupting, blocking, degrading, discriminating or charging differentially”.

“Interception of any communication without the consent of the receiving party breaches the Telecommunications Act and amounts to a breach of the operator’s licence,” it said.

It also said the rollout of the software, which Digicel has purchased from Israeli company Shine Technologies, would “hinder the growth, usage and deployment of broadband”.

A Digicel spokesman said that the company had “positive relationships” with regulators across the region and is “engaging with them on this issue.” He said the proposed initiative was “ unambiguously pro-consumer.”

Mr O’Brien’s argument is that by refusing to share revenue with operators such as Digicel the web giants are hindering broadband rollout because their actions discourage investment in infrastructure.

Ectel told The Irish Times Digicel’s threat to the web companies had been raised at a regional forum of regulators.

1 How can I view my dead brother’s will if I’m not the executor?
2 Google users in UK to lose EU data protection, sources say
3 High time: Netherlands moves to clean up absurd cannabis policy
4 UK ‘not listening’ to North’s businesses on immigration policies
5 Coronavirus test fast-tracked by Dublin company Hibergene
Real news has value SUBSCRIBE