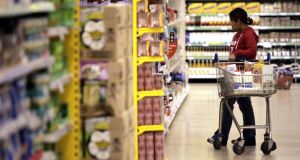 MarketHub could help supermarkets dramatically reduce the amount of perishable foods they waste while increasing the rate of their stock turnover. Photograph: Dara Mac Dónaill

The initiative could see shoppers benefit from increased competition and more special offers and discounts on fruit, vegetables and other perishable foods.

Former banker Roy Horgan, the founder of MarketHub, has formed a joint venture that he claims will be the first of its kind in the world, offering a solution that incorporates Solarprint’s solar cells into wifi-enabled electronic price display tags from Austrian maker Imagotag.

It will combine these with software provided by Dublin-based retail data and intelligence firm Profitero and US price optimisation company Revionics.

He is investing “a six-figure sum” in the new startup, which officially launches to the retail industry in the US next month.

It has developed unique intellectual property that will give large retailers more control over their pricing strategies, improving their ability to compete with the likes of Aldi and Lidl – which have a combined 13.8 per cent share of Ireland’s estimated €9 billion grocery market – and increasingly with the likes of online supermarket Ocado in Britain, and Amazon Grocery, an arm of the online retail giant that offers 200,000 grocery items.

Strategy
“If a retailer applied the right strategy using MarketHub, a store could see its sales increase by between 3 and 5 per cent,” Horgan claimed, adding that they would see a return on their investment in less than 12 months.

“If they’re reluctant to put in the capital investment, we’ll look at a partnership with stores, perhaps along the lines of offering our solution for free and then taking a small percentage of the additional sales revenue that it helps to generate,” he added.

Shoppers can also look forward to more price promotions as the new technology gives stores a more efficient and adaptable means of auctioning shelf space for a particular item and perhaps “Happy Hours” on others.

One of the joint venture partners, Revionics, already provides its price optimisation software to a number of US grocery store chains and Walgreens, a US nationwide pharmacy chain.

Advanced platform
Profitero already works with Ocado, and Imagotag’s digital price displays are used in European supermarket chain Billa’s stores, so these companies already use these elements of what MarketHub will offer, but not in the same way as its more advanced platform, Horgan explained.

Stores can initially work with a basic kit using its solution for up to 300 items, in the fruit and vegetable or other perishable foods section and then easily scale up the infrastructure from there.

It is in this area that supermarkets should be able to dramatically reduce the amount of these foods that they waste while increasing the rate of their stock turnover.

Although many are working with charities and food banks to do this, food waste accounted for up to 45 per cent of the total waste in both larger stores and smaller grocery retailers such as Centra and Spar, according to the most recent figures compiled in 2010 that were available from the Department of the Environment.

Loyalty cards
Further uses of the technology might herald an alternative to the monthly sheets of coupons that supermarket loyalty cardholders receive through the post every month.

Instead they could be alerted to offers or discounts on their smartphone whenever they visit a store – which would identify them and their shopping history.

This would happen either through NFC (near field communication) chips incorporated into digital price displays or through the low-energy bluetooth-based iBeacon technology that Apple announced it is working with earlier this year.

If Horgan’s technology is adopted by Irish stores and further enhanced by mobile technology, then our weekly trip to the supermarket looks set to evolve in a similar way as the process of hailing a taxi has with the popular Hailo app that smartphone owners may be familiar with.

4 Denis O’Brien’s media departure: ‘No politician will shed any tears’