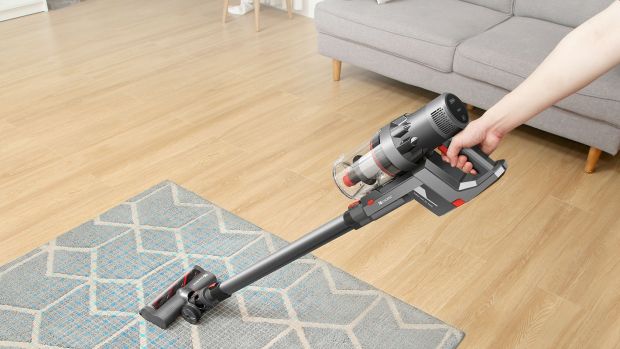 Proscenic is one of the lesser known brands on the market, but at first glance, its P11 looks the part

If you are still using a corded vacuum cleaner, you are missing out. Cordless vacuum cleaners have come a long way from their early incarnations, bringing better suction performance and battery life than their predecessors.

But not all cordless vacuums are created equally. While Dyson has made a name for itself in the sector, effectively able to replace your traditional cleaner, rivals from Shark and Samsung are nipping at its heels. They can be expensive, which leaves the way open for slightly more budget-friendly alternatives to make their mark.

Proscenic is one of the lesser known brands on the market, but at first glance, its P11 looks the part. There’s more than a little of Dyson’s influence here, with its grey and red design.

The P11 is handheld and a cordless vacuum in one. You can attach one of the cleaning heads directly to the body – there are five, including crevice and upholstery tools – or use it with the extension pole to tackle your floors.

The bin is a fairly standard at just under 0.7 litres, so it will require frequent emptying to keep it working at its best performance. And as for that performance, the P11 promises some serious suction.

On the back of the cleaner is a touch-enabled panel that displays the battery, and allows you to change from the lowest cleaning mode to the high performance. For the most part, you can leave it in auto, and the P11 will adjust to the floor type with different levels of suction as you go.

There were two things about the P11 that caught my attention: first, that the main cleaning head has a light to help pick up the dust and dirt you may miss on your floors; second, that it also has a mop head attachment so you can wash the floors as you go.

That second one was for a very specific reason. When we moved house last year, we ended up with high-gloss, white tiles. As you might expect, they’re a nightmare to keep clean, and require vacuuming and mopping at least once a day to look halfway decent. If it wasn’t such a huge job to replace them – they’re in a good proportion of the ground floor – I’d take a hammer to them tomorrow.

But we are where we are, and where I am is stuck with these for a few years at least. In the meantime, it’s a vacuum twice a day scenario, with one session handed over to a robot vacuum once the worst mess-makers have gone to bed for the night. So the idea of a mop attachment to help ease the workload was appealing.

The problem is that the P11 is just about skirting “okay” performance, even in the easiest of conditions. On hard floors, it took more time than it should have to pick up larger particles, so it took longer to clean a room than you would expect given the on-paper specs. When you are up against a battery life of less than 60 minutes, every minute counts.

If you have carpets, this may not be the cordless for you. While the P11 picked up some of the heavier dirt and grit on the most powerful setting, smaller dust particles were left behind. A quick test with some spilled talcum powder saw the P11 fail to remove the powder adequately, even with an empty bin, a clean filter and the setting turned up to high. There were white patches that were easily removed by one of its rivals.

Emptying the P11 is a messy nightmare too with the bin needing to be completely removed from the body and opened by hand. Dust went everywhere, which then had to be vacuumed up again.

It is easy to manoeuvre though, getting underneath furniture and into small spaces relatively easily. And because it is light enough, dealing with overhead cobwebs was simple.

What about that mop head? It is designed to work with plain water, so there is a small water tank that needs to be filled, and that gradually wets the microfibre pad. It is fine for a quick wipe, but you’ll need something more substantial to remove any heavy dirt. All in all, it’s still worth having but it is akin to a quick wipe with a damp cloth so don’t expect too much.

There are other positive aspects to the P11. The battery can be charged separately from the device, so you can pop it out and charge it if you don’t have room for the dock; it also opens up the possibility of having a second battery on standby if one isn’t enough. The touch controls are also quite easy to use, and when there are issues such as a blockage, that also displays on the touchscreen.

But if you are relying on this to replace your corded vacuum cleaner, you may be best looking elsewhere.

The light on the front of the main cleaning attachment means you can highlight the dust in your path, and hopefully get rid of it. The mop attachment is also a handy addition, as you can wipe over the floors as you go.

Build quality feels a bit flimsy and the battery life isn’t great. One of the big strikes against the P11 though is that it just doesn’t pick up dirt as effectively as other cordless cleaners, so it takes a lot longer to clean a room than you would expect.

The battery can be charged separately from the main unit, so you can invest in a second one if you really need it.

Fine as an add-on cleaner, but it wouldn’t replace your main vacuum.

5 Time for some common sense on mortgage arrears