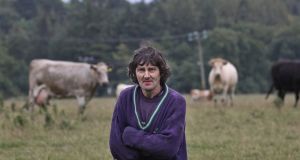 Farmer Thomas Reid, who wants to challenge planning permission granted to Intel for a planned €3.6 billion expansion to its Leixlip plant in Co Kildare.

Farmer Thomas Reid’s application for permission to challenge a planned €3.6 billion expansion to Intel’s plant in Co Kildare must be heard in the presence of the affected parties, a High Court judge has ruled.

He claims the planning board’s decision is flawed, was rushed and should be set aside.

In proceedings against the board, with Intel Ireland Ltd as a notice party, Mr Reid seeks various orders and declarations including an order quashing the permission decision.

In 2015, Mr Reid won a landmark Supreme Court decision against IDA Ireland over the use of compulsory purchase orders for his 72 acre farm. Under the proposed expansion plan, the acreage of the Intel facility will increase from 120 to 150 acres.

Mr Reid’s application for permission for judicial review of the planning approval, brought on an ex-parte basis (one side only represented), came before Mr Justice Charles Meenan on Monday.

Having heard submissions from Mr Devlin, the judge directed that the leave application be made on notice to the other parties and adjourned the matter to next month.

1 Bank leaked my loan request to family who tried to rip me off
2 Eason acquires rival Dubray Books for undisclosed sum
3 Solar panels: Are they worth the investment?
4 Accumulated profits at David McWilliams’ media company hits €675,000
5 Siblings who became ill next to wind farm settle case
Real news has value SUBSCRIBE