This week: Shower smoothies, Flappy Bird and the verdict on Janet Yellen 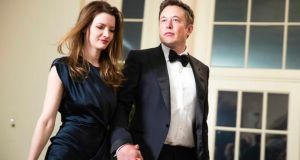 Image of the week: White House Musk
Representing the entrepreneurial world at this week’s state dinner for French president Francois Hollande at the White House was billionaire Elon Musk, of Tesla Motors and SpaceX fame, who is seen here with his second (and possibly current) wife, the St Trinian’s and Pride and Prejudice actor Talulah Riley. (They divorced, but Riley was described on the White House guest list as Mrs Musk, so . . . )

While Mr Musk was not at high-powered Washington events this week, he was busy being quoted in Forbes magazine about the company he co-founded, PayPal, which he believes shouldn’t remain part of eBay. “It doesn’t make sense that a global payment system is a subsidiary of an auction website. It’s as if [US discount retailer] Target owned Visa or something.” No Target clothing was found to be worn to the Hollande-honouring bash.
Photograph: Joshua Roberts/Reuters


In numbers: Chocolate shortage?
29
Number of months since cocoa last cost so much on world commodity markets. Cocoa for May delivery jumped to $2,974 per metric ton on Wednesday, as the market collectively remembered that it was time to buy a box of chocolates for Valentine’s Day. The commodity has climbed almost 10 per cent this year.
21
Percentage climb in cocoa prices last year, as speculation – and, some might say, deep fears – mounted that surging demand will outstrip supplies of the precious beans used to make chocolate.
$1.057b n
Estimated value of Valentine’s Day confectionery sales (75 per cent of which is chocolate) in the US this year, according to the Washington-based National Confectioners’ Association. This would make it the best Valentine’s Day since 2009 for confectioners – and gift recipients.

The lexicon: Christopher North
“Christopher North” is a new shower gel by smelly cosmetics retailer Lush. This “shower smoothie” is “rich, thick and full of it”, according to the label. So why has it got the same name as the managing director of Amazon. co.uk?

Lush, founded by husband-and-wife team Mark and Mo Constantine, originally trademarked “Christopher North” in 2012 around the time it began a trade- mark wrangle with Amazon. Originally, this was intended as a joke that would go no further than the Intellectual Property Office. But this week Amazon was not contrite enough for Lush’s liking after the High Court ruled that the online giant had infringed the Dorset company’s trademark when it used the word “lush” on its site to sell similar-looking cosmetics.

Irked by Amazon’s vow to appeal, Lush is now threatening to launch a range of bathroom toiletries under the “Christopher North” brand to “make a point about how upsetting it is to have something personal to you used by someone else”.

Getting to know: Dong Nguyen
The 29-year-old Vietnamese creator of the frustratingly difficult, retro-styled game Flappy Bird has pulled the app on the grounds that it was “just too addictive”, which either makes him a genius marketer or the world’s worst capitalist. “I just wanted to create a game that people could enjoy for a few minutes,” he explained. But instead people played for hours and hours, and wrote app reviews in which they fervently wished they had never downloaded it.

The game went viral and Hanoi-based Dong started raking in an estimated $50,000 in
advertising cash per day, but he grew “extremely uncomfortable” with the fuss. Capitalism abhorring
a vacuum as it does, copycat games such as Flappy Penguin and Flappy Whale now abound, but the original is “gone forever”, and Dong is now doing the opposite of everyone else in his industry: trying to develop a game that isn’t addictive.


The list: What they said about Janet Yellen
Janet Yellen made her first visit to Capitol Hill as chairwoman of the US Federal Reserve this week, delivering her first semi-annual report and testifying before members of the House Financial Services Committee. So how did she do?
1 “She did well”: The New Yorker concluded that headlines that dwelled on Yellen’s written testimony and not on her verbal answers on Capitol Hill was “a sure sign” of a gaffe-free performance.
2 The markets love her: The Wall Street Journal decided that Yellen had “mastered the art of Fed-speak”, which was a compliment.
3 Unemployment is her “pet issue”: So said Bloomberg Businessweek. Well, if you’re going to have a pet issue, at least it’s one that 99 per cent of people can appreciate.
4 There was one tense moment: When asked if she was “a sensible central banker, and if not, when will you become one”, Yellen looked briefly disconcerted, the Financial Times observed.
5 She’s not Ben Bernanke: Although Yellen stressed “continuity” with the policies of her predecessor, CNBC’s chief economist opined that she would and should have a good plan “B” – the “B” in question not standing for “Bernanke”.