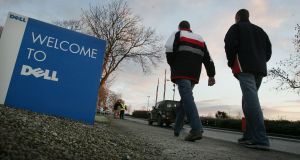 Dell is in talks to combine with EMC, in a deal that would help the companies cater to more customers and cope with a slowdown in demand for computers and storage equipment.

Dell is in talks to combine with EMC, people with knowledge of the matter said, in a deal that would help the companies cater to more customers and cope with a slowdown in demand for computers and storage equipment.

Dell is speaking to banks about raising at least $40 billion to finance the purchase, said one person.

JPMorgan Chase, Barclays, Bank of America, Credit Suisse and Deutsche Bank are among banks that have been approached about financing the deal, people said.

As part of the transaction, Dell would acquire EMC’s controlling stake in VMware, said two of the people.

The deal would involve taking EMC private, while leaving VMware’s shares publicly traded, they said. Dell may sell off some of EMC’s VMware shares in order to raise money, said one of the people.

Dell, Emc and VMware employ more than 6,000 people in Ireland. EMC has a workforce of over 3,000, most of which are based in Cork, while Dell employs over 2,300 across three sites in Dublin, Cork and Limerick. VMware, which EMC is the parent company of, employs more than 700 people in Cork.

EMC established a presence in Ireland in 1988 with its first manufacturing facility outside of North America in Ovens, Cork, followed by sales offices in Dublin (1990) and Belfast (2005). The Cork facility is the largest manufacturing site of EMC outside of the US, and in 2009 it became a a Centre of Excellence incorporating research and training.

Dell’s Innovation Centre in Ireland is one of the largest customer centres of its kind in the country.

While negotiations are far along, they still may not result in a deal, the people said. EMC and Dell both need ways to manage a slump in their main businesses, with EMC weighing strategic options amid pressure from shareholder Elliott Management.

Though the combination would be costly and difficult to finance, it would create a computing colossus that combines EMC’s leadership in digital storage with Dell’s share of the market for servers, which help businesses tackle mammoth computing tasks.

For EMC it would solve the longstanding challenge of finding a successor for CEO Joe Tucci, who was supposed to step down in February.

EMC, which has acknowledged it needs to take steps to boost shareholder value, held merger talks with Hewlett-Packard last year, people familiar with the matter said at the time.

The current plan would have Michael Dell run the combined entity, said one of the people.

Talks are further along than those between EMC and Hewlett-Packard a year ago, the person said. EMC shares rose 4.7 per cent to $27.18 at the close in New York.

VMware fell 5.8 per cent to $77.30. One of the biggest hurdles is how Dell would finance the acquisition. Taken private in 2013, Dell has about $12 billion in debt, according to analysts.

EMC’s market capitalisation is about $52 billion, reflecting the VMware stake. Dell is weighing an offer of more than $27 a share, CNBC reported, without disclosing the source of the information.