Parents unaware what their children are doing online 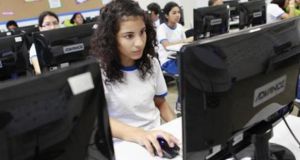 Survey suggests a quarter of Irish children have been, subject of cyberbullying. Photograph: Enrique Castro-Mendivil/Reuters

Nearly half of Irish schoolchildren say their parents have no idea about what they are doing online.

According to a survey by Irish Computer Society, many youngsters also admitted to lying about their age online and to having had hurtful comments posted about them.

The study, which assessed the online activity of 1,140 Irish primary and secondary schoolchildren, suggests Irish parents are failing to monitor their children’s online activity, despite the worries that they have.

It found that 39 per cent of girls and 45 per cent of boys said their parents were unaware of the sort of websites they were visiting.

More than half of boys (53 per cent) and 47 per cent of girls admitted to “adjusting their age” online.

Perhaps most worryingly, a quarter of children (24 per cent of girls and 23 per cent of boys) said they had been subject of cyberbullying at one time or another.

In contrast, some 5 per cent of girls and 7 per cent of boys admitted to posting hurtful material about others online.

In terms of reporting cases of cyberbullying if they saw it, the vast majority of children (92 per cent of girls and 86 per cent of boys) said they would.

When it came to the main reasons for using the internet, social networking topped the list, with 83 per cent of girls and 77 per cent boys citing it as their main reason for being online.

The research, which assessed the differences in online activity between girls and boys, found 57 per cent of boys used the internet for games compared to just 32 per cent of girls.

Some 70 per cent of girls listed schoolwork among their main uses for the internet in comparison to 55 per cent of boys.

In terms of surfing, the gender divide was less pronounced with 62 per cent of girls and 69 per cent of boys listing it as one of the main reasons for going online.

Some 41 per cent of girls and 38 per cent of boys also cited shopping as a reason for being online.

1 Will brother’s widow get half of our parents’ estate when they die?
2 Banks face ‘hectic’ loan restructuring as payment breaks end, Goodbody warns
3 Should I switch bank now with Ulster Bank at risk of closing?
4 Save yourself money and heartache by reviewing your house insurance
5 ‘I have three children and a dog, so I feel like a bit of a human ATM’
Real news has value SUBSCRIBE