Bookmaker says financial and password information not compromised in 2010 case 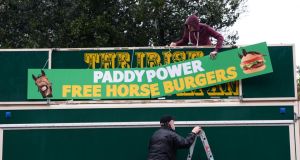 The Dublin-listed company said no financial information or passwords had been compromised in the 2010 hacking incident, the extent of which came to light in recent months as part of an investigation in Canada.

Paddy Power - which offers clients betting, casino games and other services - said that account monitoring has not detected any suspicious activity to indicate that customers’ accounts have been adversely impacted in any way.

The bookmaker said it had contacted the Data Protection Commission and An Garda Síochána about the matter. It advised customers to “review other sites where they use the same prompted question and answer as a security measure and update where appropriate”.

It said customers who opened an account after 2010 would not have been affected and that it was pro-actively contacting 649,055 people who were.

Paddy Power was advised in May about an allegation that the dataset was in the possession of a person in Canada. Once the development was confirmed the company obtained two court orders in Canada last month to seize IT assets in order to wipe the data and examine his bank accounts.

“The full extent of the 2010 data breach became known to the Company in recent months when it took legal action in Canada with the assistance of the Ontario Provincial Police to retrieve the compromised dataset from an individual,” the statement added.

Peter O’Donovan, managing director for Paddy Power’s online business, said the company regretted that the breach had happened and apologised to those affected.

“We take our responsibilities regarding customer data extremely seriously and have conducted an extensive investigation into the breach and the recovered data.”

1 How long can Government afford to keep State pension age at 66?
2 Brexit: UK and EU agree to intensify talks in rush for deal
3 Declan Ganley denies Donald Trump trying to swing lucrative 5G contract for Rivada
4 Marquees and fleets of delivery vans: how supermarkets are ready for Lockdown 2
5 Ryanair and Eir the worst for customer service during Covid crisis
Real news has value SUBSCRIBE