Speaking on RTÉ radio, Web Summit founder Paddy Cosgrave has said that 'lies' told by the Government serve as 'a useful and practical distraction'. Audio: RTÉ 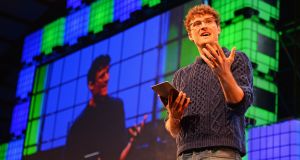 The Government is using the Web Summit as a “distraction” from the real issues impacting people on a day to day basis, founder Paddy Cosgrave said ahead of the launch of the 2015 event at Dublin’s RDS on Tuesday.

Speaking on RTÉ Radio, Mr Cosgrave said that focus on Government support for the event had been a “very opportunistic tack” taken.

“Ultimately the Web Summit is not all that important,” he said, but added that the “ way it’s played out way, the way it’s being spun, and the lies that have been told by the Government”, it was being used as a “useful and practical distraction” by Government from media attention about the real issues at hand, and would be “of no consequence” come an election.

Of a much publicised wish list the organisers of the Web Summit submitted to Government, which included free Garda escorts for VIP speakers, Mr Cosgrave said it was a “very clever move by civil servants” to ask for a list of all their requirements, whether they were unreasonable or not.

Mr Cosgrave also criticised the lack of interest from Ministers in the event, and said that all Ministers and Senators were issued with invitations on Friday.

“Since 2013 we’ve publiclly always lavished the government in praise, while privately constantly trying to get politicians to do what politicians around the world do at a web summit - focus on the opportunities to do business. Today there are ministers from countries as large as France and as small as Kosovo outside doing the work they’ve been elected to do,” he said.

But Government support, or lack thereof, was not the only reason for moving the event.

“I think the Web Summit has got too big for the city,” Mr Cosgrave said, adding that over the last few years, “the strain” on the city has gotten too much.

“When you bring so many people from around the world to what is a small city only going to accentuate the problem,” he said, adding, “We needed to find a bigger home and we found one”.

However, he was “optimistic” that there would be an improvement in this year’s event, such as traffic calming measures around the RDS.

While the 2016 event will now take place in Lisbon, thanks to help from the Portuguese government, Mr Cosgrave did not rule out a return to Ireland at some point in the future.

“We’d welcome any opportunity to come back to Ireland” he said.

Speaking on stage after the interview Mr Cosgrave didn’t even mention Lisbon, though he did touch on the rapid expansion of the event since its first edition back in 2010, when there were 100 or so attendees in Chartered Accountants House.

“We have about double the number of attendees as we had last year,” he said, continuing the annual doubling in size that helps explain why the event has outgrown Dublin, never mind the RDS.

Networking is what it’s all about

Despite that size, Cosgrave maintains the Web Summit is still principally about making connections: “Networking is what makes the web summit, ultimately, magical. Create as many relationships and meet as many people as possible.”

He outlined how the growth of the Web Summit can be illustrated through the choice of the lanyards - apparently, a lot of work has gone in to creating these signs around attendees necks - evidence, says Cosgrave, of the attention to detail that has seen the Web Summit grow from a bedroom in Ranelagh to a staff of 150 people.

And then he hands over to Andra Keay of Silicon Valley Robotics - as future-focused a first speaker as can be imagined.

This year’s Web Summit is expected to welcome over 40,000 attendees over the next three days at Dublin’s RDS, and will include 1,000 speakers including the founders of Instagram and Pixar.