One in five rural dwellers cannot get broadband, says study 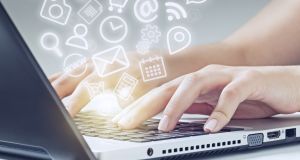 The Department of Communications, Energy and Natural Resources confirmed in April that a new national broadband contract would not be signed until 2017. With the plan expected to take between three and five years, it now risks missing the 2020 target set to deliver broadband to all households.

One in five people living in rural Ireland say they cannot get broadband, and almost 25 per cent of those with access to it claim speeds are too slow.

That’s according to a new report on the digital divide in Ireland and the impact digital connectivity on life in rural Ireland.

The study found an estimated 1.8 million people have broadband in rural Ireland. About one in four use their connection at home for work purposes, with 150,000 people avoiding a daily commute as a result, but almost a third said unreliable broadband prevented working from home.

A quarter of all broadband users in rural Ireland said their connection speeds were too slow, driving one in five people to internet cafes, libraries and other areas with better connectivity.

The report, which was commissioned by Vodafone and compiled by Amárach, found high-speed internet was broadly considered an essential part of life, with 25 per cent of people claiming they would be forced to move to a city if broadband did not exist.

Almost 75 per cent of respondents said digital technology helped them stay in touch with family, while just over half used the internet to meet and make new friends.

A fifth of people who said they did not have broadband claimed it was down to a lack of availability of services.

Despite the difficulties with access to fast internet services, the report found a significant adoption of technology among communities. About 70 per cent of people have a smartphone, with just under half owning a tablet of some sort. More than two-thirds have a laptop at home.

“It is clear that people in rural Ireland are embracing technology and using it across all aspects of their lives but the digital divide still prevents many from participating fully in a ‘gigabit society’ – bringing together our unique rural and urban heritages in a future Ireland where there is light speed connectivity for everyone, everywhere,” said Vodafone Ireland chief executive Anne O’Leary.

“The possibilities and benefits of digital connectivity are endless not just for rural Ireland, but the country as a whole. The majority of our population still live in rural Ireland and it will be critical that all of society is in a position to take equal advantage of the digital revolution.”

The report comes only weeks after it emerged the implementation of the national broadband plan may be pushed back.

The Department of Communications, Energy and Natural Resources confirmed in April that a new national broadband contract would not be signed until 2017. With the plan expected to take between three and five years, it now risks missing the 2020 target set to deliver broadband to all households.

1 Ross O’Carroll Kelly column 'not racist towards English people'
2 Brown Thomas and Arnotts shoppers will be able to book time slots for entry
3 What is in the EU’s €750bn recovery plan and how will it affect Ireland?
4 Beware of the rush to get back to normal business amid Covid-19
5 Irish economy to contract by 12%, ESRI forecasts
Real news has value SUBSCRIBE