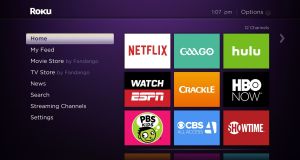 GAAGO will join more than 3,000 channels on the Roku platform

Gaelic games are set to become available to millions of homes in the US as the GAAGO service unveiled its own channel on streaming platform Roku.

GAAGO is a collaboration between RTÉ and the GAA, a paid-for service that makes the games available to those who live outside Ireland.

Launched two years ago, it initially focused on the GAA All Ireland Football and Hurling Senior Champions.

Since then it has doubled the number of games shown, now including the Allianz League, prompting a rise in the number of subscribers paying for the service.

It now streams games to customers in more than 180 countries worldwide.

Under the new deal, GAAGO will join more than 3,000 channels on the Roku platform, along with BBC Sport, Netflix, iPlayer and the NFL, which are available to 10 million households in the US.

“As GAAGO continues to grow at a rapid international pace, it is vital that new viewing platforms and enhanced live match broadcast experiences are made available to GAA members around the world,” said Peter McKenna, stadium and commercial director of the GAA.

“The GAAGO channel on Roku not only facilitates easier access to our games, on the preferred larger screen device, it also places Gaelic games content among the offerings of other leading global sports bodies.

“With well over 150 active GAA clubs in the US, as well as it being GAAGO’s largest sales market by far, growing our distribution network in that territory is crucial and Roku is another step in addressing this need.”

More than 120 GAA events will be available through GAAGO in high definition, including the 2016 GAA championships and RTÉ’s The Sunday Game show.

“RTÉ’s collaboration with the GAA to deliver GAAGO has been built on creatively meeting the needs of Irish people throughout the world,” RTÉ’s chief digital officer Múirne Laffan said.

“Our growth strategy for GAAGO is focused on enhancing the fan viewing experience and developing key markets.”

Although the channel is free to download on Roku, access to the games requires a game or season pass, with most games priced at $11 (€10) and a season pass at $175 (€160) that provides access to more than 100 games.