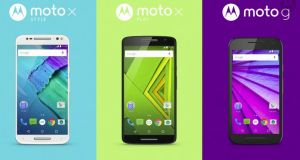 Motorola is offering two new Moto X handsets – the Moto X Style and the Moto X Play, which will go on sale in Ireland in September. The company claims the third generation Moto G, available in August, is water resistant up to 1 metre for 30 minutes.

Motorola is set for a fresh assault on the mobile market with three new handsets as it focuses on bringing more affordable products to consumers.

The Lenovo-owned firm unveiled two new Moto X handsets and the third generation Moto G phone, all of which promised to undercut the competition by around $300.

Revealing the Moto X Style and Moto X Play, the company promised a purer Android experience for customers, with a better camera and the fastest charging ability of any of its rivals.

The Moto X Stye has a 5.7 inch quad HD screen and a 21 megapixel camera that is among the top three in the world, the company has claimed.

On the inside, it’s powered by a 1.8Ghz Snapdragon processor, 3GB of RAM and comes with up to 64GB of storage, which is expandable. The Style allows users to choose from a soft grip back, leather or wood finishes, while the Play brings a bit more colour into the mix.

“We live in a mobile culture,” said Adrienne Hayes, Motorola’s head of marketing, before quoting some statistics that indicated consumers are taking the relationship with their phone more seriously than before.

According to Motorola, 60 per cent of people have slept holding their phone, while 17 per cent admitted taking it into the shower. “We love our devices, but they don’t necessarily, love us back,” she said.

Motorola president Rick Osterloh said the company had been rebuilding Motorola from the inside out, with a focus on the consumer who “shouldn’t have to settle for outdated technology to get an affordable phone”, he said.

The company is offering the more affordable Moto G to consumers, which comes with a 13 megapixel camera adapted from the Nexus 6 handset and improved for the new G. The phone, which has a 5.5 inch screen, also has MotoAssist, a technology that allows the device to learn user behaviour and adapt accordingly, for example muting the volume when coming home in the evening, or turning it up when in a public place.

The handset is also water resistant up to 1 metre for 30 minutes, meaning it will survive a dip or two with no ill effects.

The third generation Moto G, meanwhile, will be customisable through Motorola’s MotoMaker service, which allows customers to choose colours and accents, as well as add engraved messages to handsets.

The Moto G will come to Ireland from early August with prices ranging from €179 on prepay tariffs and from free on billpay contracts.

The Moto X will go on sale in Ireland in September.