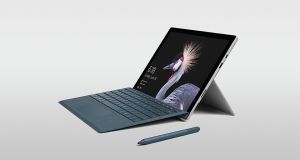 The Redmond, Washington-based company introduced the fifth version of the Surface Pro at an event in Shanghai, the first time it has held the launch of a major product outside the US. Microsoft also announced a version of Windows 10 for use by the Chinese government and state-owned enterprises, ending a standoff over the operating system by meeting the government’s requests for increased security and data control.

Surface Pro is the workhorse of the company’s computer hardware line. It is the biggest seller among the Surface devices, a category that Microsoft created – the two-in-one, or a tablet with a removable keyboard. Yet Microsoft’s Pro 3 and 4 are ageing, and partners such as Lenovo Group and HP have come out with their own Windows-based versions that give Microsoft software revenue but take away hardware sales. Meanwhile, Apple’s take on the category, the iPad Pro, has been stealing market share.

Those factors contributed to a 26 per cent drop in Surface sales last quarter. The new version should turn that around, said Yusuf Mehdi, who oversees marketing for devices and Windows. The device has 13.5 hours of battery life, a 50 per cent improvement over the previous version, and runs Intel’s faster seventh-generation Core chips.

“We have shown it to corporate accounts already and the reaction has been very positive,” he said. “We are optimistic this will get a good start out of the gate.”

The Pro will be available for pre-orders on Tuesday starting at $799 (€712) in the US and for €959 in Ireland and goes on sale on June 15th, the same day as the Surface Laptop Microsoft announced earlier this month. The device has a new kickstand that lets it fold almost flat to resemble a drafting table, similar to the pricier Surface Studio computer, and the Pro can now be controlled on screen by the Surface Dial device that Microsoft introduced with the Studio.

The government can also remove features it doesn’t want like the OneDrive file-sharing service, or certain entertainment apps. The software is available only for government use and won’t be sold to any other Chinese customers, Microsoft said.

Operating in China has been something of a minefield for US technology companies. Some are blocked, Microsoft is facing an anti-monopoly investigation and in January a law took effect that requires telecommunications and internet companies operating in China to provide law enforcement with technical assistance, including decryption of sensitive user data, in any probe meant “to avert and investigate terrorist activities”.