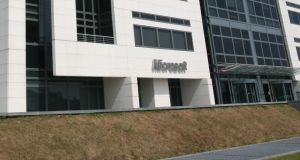 The company, which is part of a “double Irish” structure involving Microsoft companies that are tax resident in Bermuda, has three subsidiaries, one each in Ireland, Luxembourg and Netherlands, the three EU member states that have been the focus of European Commission attention in relation to multinational tax issues.

The company’s cost of sales for the year was $2.8 billion (€2.5 billion) while “administrative expenses” were $17.9 billion (€16 billion). These are most likely royalty and other IP payments made to other Microsoft companies not tax resident in Ireland. There is no explanatory note about the expenses in the accounts, and a request for a comment on the matter had not been responded to at the time of going to press.

Staff costs were $137 million (€122 million) and the average number of employees during the year was 735. Notes to the accounts say the company believes its tax estimates are reasonable and that no provision had been made in relation to the EU tax audits.

1 How much state pension will I get next year?
2 Ulster Bank to introduce new card payment controls on app
3 Oxford Covid vaccine trials offer hope for elderly
4 Covid-19 will worsen shortage of accountants, says CPA Ireland
5 Hurrah for the companies giving staff more time off
Real news has value SUBSCRIBE