Back in the 1990s, it was a major surprise when Intel and Netscape invested in the OS 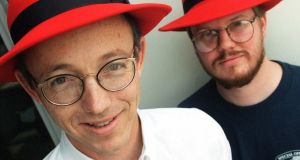 In 1998, while out in California, I received a press notification for what looked to be an unusually compelling panel at an annual conference of internet service providers (be still, my geek heart) in San Jose.

The chief executive of Red Hat, a little company offering a supported version of the operating system Linux, was to make an announcement. Also on the panel were a top executive from Intel and one from Netscape, internet pioneer Marc Andreessen’s company which, at the time, offered the most popular internet browser.

The panel would also include the Finn Linus Torvalds, the creator of Linux, which turns a mature 25 this month. Torvalds was, and remains, a geek superstar guaranteed to draw adulatory crowds of programmers and system administrators. He was not a person one expected to see seated in an on-stage semi-circle with companies such as Intel and Netscape.

I signed up for a press pass immediately. I’d actually have gone along just to see Torvalds. I liked his dry sense of humour, which included his semi-joking advocacy of, as his trademark quip went, the eventual “total world domination” of his namesake operating system (OS).

But looking at that panel, anyone with a news sense could sniff something else was going to be in the air besides geek chat. This curious line-up must have a purpose. And, of course, it did: a truly groundbreaking moment for Linux. Here’s what I wrote at the time.

“Intel and Netscape announced they had taken an equity stake in the tiny North Carolina company Red Hat. That means that Red Hat now will get access to the same advance information on Intel’s upcoming chip technologies as Microsoft. It means two of the biggest tech heavyweights are backing Linux as an OS for the corporate market. The entry for Linux is the server market for internet and intranet applications – the kind of applications Netscape makes, while high-end chips for servers are what Intel most likes to sell.

“All in all, an interesting little marriage.”

Given the surreptitious, renegade rise and rise of Linux, it was an extraordinary breakthrough. Linux was, at the time, the dirty little secret at many of the largest companies in the world. Many sysadmins down in the basement rooms of Fortune 500 companies were running internal networks, and those newfangled websites every company was then getting, on Linux, often without anyone in the executive suite being aware of it.

That’s because the C-suite would likely have freaked out. Linux didn’t come from a big company with sales representatives, support teams and liability insurance. Oh no. It was an open source OS and distributed under the GPL (General Public License) meaning all its code was public and could be worked on, debugged and improved by anyone. If someone using Linux had a problem, they could post about it in various forums, and others would step in and help. For free.

By 1998, thousands of programmers all over the world had contributed to the kernel – the core code – of Linux. it was considered more stable, reliable and – in that special term of admiration used by coders – elegant than other options, such as Windows.

By 1998, too, a few big tech-oriented organisations were revealing that they happily relied on Linux: Nasa, for example, and the stars of the rising young computer-special-effects industry. Notably, the movie Titanic’s special effects were powered by Linux.

Red Hat was one of several small new companies building a business by offering a branded “distribution” of Linux and offering formal technical support.

Now, here on stage, were two big companies – one in computing, one in the new internet sector – saying they’d invested in Red Hat.

Shortly afterwards, in 2000, technology behemoth IBM surprised many by announcing a Linux strategy, a sure sign of Linux going into the corporate mainstream.

Not everyone who loved Linux and open-source software was thrilled. Much debate ensued – and continues in this strongly opinionated, passionate community – over whether the OS might become too commercialised or start to “fork” (as the term goes) into too many sub-versions or even proprietary versions.

Yet what a success Linux has become. A well-regarded 2008 Linux Foundation study valued the Linux kernel at $1.4 billion and estimated it would cost nearly $11 billion to develop the Fedora Linux distribution from scratch. Its whole ecosystem was valued at $25 billion.

These days, Linux distributions (and related open-source software) are widely used across the globe. Linux is ubiquitous in the corporate world. The C-suite doesn’t panic.

Thinking back to when I sat in that audience in 1998, I definitely was excited about the announcement and where things might go. But, especially in that overwhelmingly Windows-dominated time, I sure didn’t imagine Linux would be as mainstream as it is today.

So now, as Linux turns 25, here’s a tip of the hat (red or otherwise) to the mighty little OS’s power, appeal and durability. In other words, its total world domination.