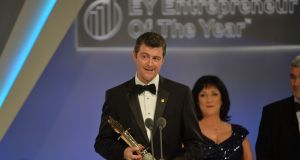 Brendan Mooney, chief executive of the Belfast-based software firm Kainos, has scooped this year’s EY Entrepreneur of the Year award.

Kainos, which is the North’s largest locally owned IT services company and one of only two listed firms in Northern Ireland, began life as a Queen’s University spin-off.

“I was genuinely quite shocked to win. When you look at the other finalists there’s some fantastic companies with great stories and good business leaders. I really wasn’t expecting to win at all,” said Mr Mooney.

“The award is for the company really rather than myself and it’s great in terms of helping to attract new talent. Last year, 11,000 people applied for jobs with Kainos and we constantly want to have a conversation with people who might want to work for us and the award will help us do that,” he added

Established in 1986 as a joint venture between ICL (later Fujitsu) and Qubis, it now employs 860 people across five countries. Clients include Diageo, FBD, Travelex, Netflix and the National Health Service (NHS).

With a market capitalisation of £235 million (€262 million), Kainos develops digital technology solutions for businesses and organisations in the public, healthcare and financial services sectors. In the last four years alone it has delivered 33 per cent compound growth.

During its 30 years in business, the company has successfully spun out two software companies. Last year, Kainos completed a £161 million flotation on the London Stock Exchange.

Mr Mooney, who joined the company in 1989 as a graduate software engineer, was appointed chief executive in 2001.

The businessman received the prestigious award at a gala event in Dublin on Thursday, attended by more than 1,500 business leaders.

In addition to being selected as the overall winner of EY Entrepreneur of the Year for 2016, Mr Mooney also scooped top honours in the Best International Entrepreneur category.

“Brendan Mooney is an inspirational leader who has grown Kainos from 12 employees to a global business employing almost 1,000 people today. With a clear vision he has positioned the company as a leader in digital technology supporting over 150 customers globally,” said Anne Heraty, chairperson of this year’s judging panel.

Property veteran Stephen Vernon, the chairman of Green Property and director of Green Reit, which has a market cap of close to €1 billion, was named EY Industry Entrepreneur of the Year, while Paul Quigley and Andrew Mullaney of NewsWhip picked up the award for EY Emerging Entrepreneur Of The Year. Their media-monitoring service tracks millions of news stories every day in more than 60 countries, and boasts more than 320 clients globally.

As the overall winner, Mr Mooney will now go on to represent Ireland at the World Entrepreneur of the Year Awards in Monte Carlo next June, where he will compete with more than 60 leading entrepreneurs from across the globe.

“The programme becomes more and more competitive each year, and this year was no exception, with the judges facing a real challenge in selecting an overall winner. Kainos however stood out, as a truly disruptive and innovative company, which, under the leadership of Brendan over the past 15 years, has gone from strength to strength,” said Kevin McLoughlin, partner and head of the EY Entrepreneur of the Year awards.

One of Ireland’s leading scientists, astrophysicist Dr Susan McKenna-Lawlor, an emeritus professor at Maynooth University and the founder and director of Space Technology Ireland, received this year’s Special Award for her contribution to space exploration.