Is Gopro rival more than its budget price tag? 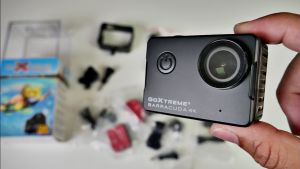 Go Extreme’s Barracuda 4K is waterproof up to 10m without a housing.

Remember when GoPro was the only option if you wanted an action camera that would survive more than one trip? Times have changed. More importantly, so have the prices.

One of the more reasonably priced GoPro alternatives it Go Extreme. The company has a range of cameras that cover everything from serious extreme sports to creating 360° footage, and all at prices that won’t exactly nuke your finances.

The Barracuda 4K is designed to be used in wet environments. It’s waterproof up to 10m without a housing, so all you need to do is turn it on and go.

The buttons – power on the front, the button to start and stop shooting on the top – are chunky, which makes them easy to use when you are underwater. It’s a small consideration, but a necessary one.

A two-inch touch screen gives you access to menus and options for shooting, such as slow-motion modes. It’s not the highest resolution for a touch screen, and doesn’t do the resulting footage any justice, but it gets the job done.

The entire camera is roughly the same size and design as a Go Pro. Inside the box you get enough mounts to keep you happy,

The microSD card fits into a slot alongside the battery, but it’s still possible to get the card out – if you need to change it, for example – without pulling out the battery.

That’s a good thing for several reasons. First off, you don’t want to have to keep rebooting the camera if you need to swap over the card; and secondly, it’s a bit difficult to get the battery out. It’s a tight fit, but the problem is the tab is slippery plastic. I managed it with a little effort but anyone with larger hands may struggle to get a grip on the tiny tab to pull the battery out.

It’s not the only issue with the battery. How long the battery lasts depends on what you are doing with it. Push the resolution to 4K footage and you’ll find you eat through that battery – and your memory card – quite quickly. Push it down to HD and you’ll eke more life from a single charge. The other option is to stock up on spare batteries. That’s not ideal, but then again, it’s not exactly unheard of for rival products. Under an hour was about typical for my test of this camera. It’s not the worst, but with the GoPro’s Hero 5 notching up more than an hour, the difference is noticeable.

One issue you may run into is that this camera only supports cards up to 64GB. If you are committed to shooting in 4K, that means carrying extra cards for particularly long sessions.

The footage itself is good. If you are going for 4K, the quality is there, and stepping it down to 1080 isn’t catastrophic.

One thing to note though: the Barracuda 4K has a 170° wide-angle lens. The footage you shoot has a fish-eye-lens look to it, which is fine for some situations but not all. There’s no way to counter or change this, so if that aesthetic isn’t your thing, this camera may not be for you.

The biggest draw for this camera is the price. At €160, it’s a very inexpensive way to get 4K footage. The fact that it is waterproof without a case isn’t unusual these days, but given the low cost it’s certainly a welcome addition. There are also some handy features, such as the motion-activated mode that will kick the recording into gear once it detects movement.

Battery life isn’t spectacular, but then, if you are used to using other action cams, you’ve probably already experienced that for yourself. Things have improved, but the GoExtreme doesn’t last as long on a full charge as I’d like. The battery is difficult to remove too, so if you need to change it while you’re out, gloves are out. The wide-angle lens is fish eye, which isn’t suitable for every situation.

The touch screen is two inches and not the highest resolution, but the footage looks much better once you take it off the camera. And there are so many mounts and accessories included, it’s unlikely you’ll have to hunt down any extras.

As a budget action camera, the Go Extreme barracuda performs well. But if you don’t like fish-eye footage, this isn’t for you.