Arckit takes gold medal in US Parents’ Choice Awards...just in time for Christmas 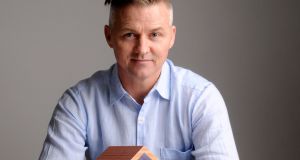 Damien Murtagh, inventor of Arckit: “The design possibilities are endless. One day you could be creating a basic structure, the next a complex home over four different levels.” Based on modern panelled building techniques, Arckit - which is already stocked by US toy shops, including Barnes and Noble, uses interconnecting components that allow users to create a vast range of structures.

An innovative modelling kit developed by an Irish architect, which has been dubbed “the new Lego” by fans, has won a major US toy award - just weeks before parents begin to think about Christmas presents.

Arckit, created by Damien Murtagh, was invented as a tool for architects but has found an unexpected niche in the toy market, now recognised by a gold medal in the US Parents’ Choice Awards.

Based on modern panelled building techniques, Arckit - which is already stocked by US toy shops, including Barnes and Noble, uses interconnecting components that allow users to create a vast range of structures.

Arckit was originally designed by Mr Murtagh to offer his clients physical models rather than 3D computer drawings.

Many parents and children have offered feedback, some dubbing Arckit “Reality Minecraft” and the “new Lego” .

Mr Murtagh is now based in London and the start-up was shortlisted for this year’s Irish Times InterTradeIreland Innovation awards.

Ellie and Dom Homce, who reviewed Arckit for the Parents’ Choice Awards, said: “It is safe to say that Arckit has a place on many different levels. It can be used by professional architects, but it also teaches the fundamentals of architectural design to young people and is a great introduction into the architectural process.”

Mr Murtagh said: “It’s a great honour to be recognised by the Parents’ Choice Awards, and to win a gold medal is the icing on the cake.

“Arckit has been really well received by children here [in London] and in the US. It’s a more sophisticated modelling system than others on the market and the modular components mean users can be as creative as they want.

“The design possibilities are endless. One day you could be creating a basic structure, the next a complex home over four different levels.

“Awards like this only confirm what we already know – that we have a great product which encourages children to be more creative, gets them away from computer screens, and has a fun and educational element too.”

Arckit is for sale in a number of retailers and on their website from €59.99.