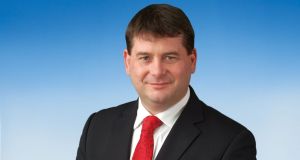 Minister for Data Protection Dara Murphy: will arrive in Brussels amid claims Ireland is pushing for changes to European privacy law which Lobbyplag says would benefit interests of private companies and public bodies over citizens. .

Minister for Data Protection Dara Murphy heads to Brussels tomorrow amid claims that Ireland is one of Europe’s top three offenders in undermining citizens’ rights.

Privacy campaign group Lobbyplag put Ireland in third place behind Germany and Britain in pushing for changes to European privacy law which the group said would benefit interests of private companies and public bodies over citizens.

In a study of 11,000 pages of confidential documents from the European Council, where EU member states meet, the Lobbyplag group said it believed just one of Ireland’s 34 tabled changes to the new EU data regulation improved privacy. Britain tabled 51 changes, of which Lobbyplag suggested 49 disimproved privacy.

“As expected by many insiders, the UK and Ireland are in places two and three of the list of countries that lowered the level of protection,” the group noted, “but the country with the support for the most negative changes may be a surprise to many: Germany.”

Germany has tabled 62 changes to weaken privacy standards, in the view of Lobbyplag, and 11 to strengthen it.

For its analysis, Lobbyplag focuses on proposed changes in the crucial first three chapters of a recent council draft document. Of 151 changes it documented, a total of 132, or 87 per cent, if approved would lower privacy, it argued. More than a quarter – 40 changes – could result in protection lower than the current 1995 rules, it claimed, while just 19 of the proposals would result in more protection.

A spokesman for Germany’s interior ministry said the issue of data protection was “about balancing fundamental rights on both sides”.

“The interior ministry is not interested in destroying business models and thus jobs,” said the spokesman. “Ever more countries back the German position that it must be possible to find a majority for data protection rules that doesn’t destroy companies.”

Throughout these talks, Germany insisted it would fight any EU proposals resulting in a lower data-protection standard than under German law. In recent days, however, Berlin stands accused of pressing EU member states to accept a lower German standard on certain data-collection provisions, in particular to benefit its direct marketing and credit scoring companies.

Of the changes reportedly backed by Ireland, one appears to water down rules on when data-collecting bodies must delete user data, in particular data collected when the user was a child. According to Lobbyplag, Germany and Ireland have proposed deleting an obligation on data collectors to erase user data “when the storage period consented to has expired”.

In addition, Ireland appears to support removing an article that respects “the essence of the right to the protection of personal data” in favour of a definition that allows data collection “in the public interest”.