Internet pioneer sets out his vision for the future 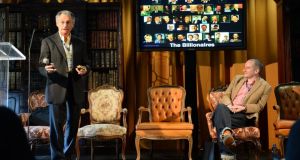 Leonard Kleinrock, on the Library Stage of the Web Summit, in the RDS Dublin.Photographer: Dara Mac Dónaill / THE IRISH TIMES

While the Web Summit’s main stage plays host to tech rockstars speaking to thunderous applause, the library stage serves as a quieter, more intimate venue for attendees interested in how technology is impacting upon education, culture and society.

As was fitting, the keynote speaker here today was Prof Leonard Kleinrock, dubbed the father of the internet for his early contribution to computer networking and ARPANET, the forerunner of the internet. When the idea of connecting computers was first proposed it was ignored, he says. “In 1969 the internet was invented. Nobody noticed. We approached AT&T, nobody cared!”.

Now, there exists more internet connected devices than there are people. We are in the age of the internet of things, says Kleinrock. “Devices are getting really small and really cheap really fast. And they’re on the move.” He says all of this represents disruptive opportunities for new technologies, new applications and new approaches.

“Yesterday was the 44th anniversary of the sending of the first internet message so it’s appropriate we’re talking about it today,” Kleinrock added as he described the next four phases of the net: nomadic computing, smart homes and other smart spaces, intelligent software agents and ubiquitous computing.

“All of these things are infrastructure, which is predictable. What we can’t predict is the software and applications that will sit upon this.” These applications might not exist yet or they may be what is being demonstrated right now by some of the startups gathered here today.

1 PTSB plays down Ulster Bank talk as it sells €1.4bn of loans
2 Up or down – how much is your Local Property Tax this year?
3 Housing crisis will be permanent unless there is radical rethink, industry warns
4 How much state pension will I get next year?
5 Irish tech company Asavie acquired by Nasdaq-listed Akamai
Real news has value SUBSCRIBE