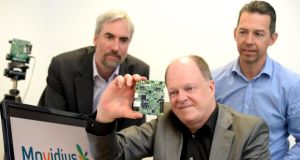 Movidius makes computer vision hardware which has applications in drone and camera technology, and lists Google and Lenovo among its blue-chip clients.

The company was recently named one of the 50 smartest companies in tech by the MIT Technology Review.

The price paid by Intel has not been disclosed although it is believed the deal was worth close to $400 million (€355 million). This is significantly higher than the €250 million valuation placed on the company last year following a fundraising round.

The Irish taxpayer also previously invested an undisclosed amount in Movidius through the China-Ireland Growth Technology Fund, which is funded by the Ireland Strategic Investment Fund (ISIF).

Movidius, which was co-founded by Seán Mitchell and David Moloney in 2005, employs 180 staff across its global operations. It recently announced plans to create 100 jobs in Dublin after raising an additional $40 million from new investors.

“We will continue to operate with the same eagerness to invent and the same customer-focus attitude that we’re known for, and we will retain Movidius talent and the start-up mentality that we have demonstrated over the years,” said company chief executive Remi El-Ouazzane.

While both Mr Mitchell and Mr Moloney retain a shareholding in the business, along with other management and staff, it has been much diluted over several fundraisings.

Movidius’s technology is expected to be integrated with Intel’s RealSense platform, which is being built into augmented-reality headsets, webcams and drones.

“We see massive potential for Movidius to accelerate our initiatives in new and emerging technologies,” said said Josh Walden, general manager of the ne technology group at Intel.