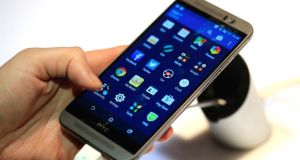 HTC One M9: Taiwanese company’s flagship smartphone failed to impress when it was released earlier this year in April. Photograph: Pau Barrena/Bloomberg

HTC announced plans to cut 15 per cent of its workforce soon after it warned of an unexpectedly large third-quarter loss, as the ailing Taiwanese smartphone maker struggles to reverse a precipitous decline in market share.

The company was until 2011 the leading maker of phones using Google’s Android operating system and, at its peak, accounted for more than one in 10 of all smartphones sold worldwide.

But its high-end phones, while expensive to produce, have been unable to match the brand power of market leaders Apple and Samsung, leaving it battling to set itself apart from a plethora of other Asian Android-based peers.

HTC said after the Taipei market closed on Thursday that it would implement a “streamlining of operations” aimed at cutting operating costs by 35 per cent. This would entail a reduction of 15 per cent in its headcount, which was 15,685 at the end of March – implying a cut of about 2,350 jobs.

Cher Wang, who took over as HTC chief executive from her co-founder Peter Chou in March, said the “realignment” would give the company more flexibility to move beyond smartphones into new product areas, such as virtual reality headsets.

Shares in HTC have fallen 28 per cent since last Friday, when it said it expected a third-quarter net loss of up to 4.8 billion New Taiwan dollars (€133 million) – five times wider than analysts had anticipated, and compounding an NT$8bn loss in the second quarter. The company’s market value has dropped 96 per cent since its peak in April 2011.

The losses reflect a slump in HTC’s smartphone market share to less than 2 per cent and a lukewarm reception this year for its One M9 flagship phone.

Chialin Chang, chief financial officer, told analysts last week that the company would cut costs by “dramatically” reducing its portfolio of products, to focus more on high-end phones as well as non-smartphone products.

But some analysts in Taipei see little sign of the company regaining a strong footing in the increasingly saturated smartphone market.