How we can dismantle bureaucracy and empower employees 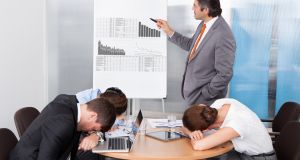 The bureaucratic class, Prof Hamel says, comprises 18.4% of the US workforce and claimed $3.2tn in compensation in 2018. Photograph: Andrey Popov/iStock

The legendary management thinker Peter Drucker predicted back in the late 1980s that within 20 years, we would have half the number of levels of bureaucracy and one-third the number of managers. For once, Drucker was spectacularly wrong.

Countering the power and negativity of bureaucracy has become something of an obsession for another key figure in modern management. Prof Gary Hamel from the London Business School is on a mission to rid it from our organisations.

His new book Humanocracy, creating organisations as amazing as the people inside them is a bold manifesto for replacing traditional hierarchies with a more meritocratic, innovative and human-centred approach to management.

Hamel does not underestimate the challenge and concedes that bureaucracy has been successful because it worked well for many years.

“When Frederick Taylor published the Principles of Scientific Management in 1911 the goal was to turn obstreperous, free-thinking, strong-willed human beings into reliable factors of production – we kind of succeeded in doing that. The reality is that bureaucracy is probably the single greatest human invention of all kind, because all of the scientific inventions, the automobile, the electric motor, the telephone, and everything that followed, those would have never reached us as consumers if we didn’t have this system that allowed us to bring people together to do things at scale in a repeatable way,” he says.

But times change and bureaucracy is no longer fit-for-purpose in an era in which real innovation is the key to competitive advantage. Moreover, bureaucratic organisations are now recognised as dispiriting places that crush the souls of those who work in them.

Hamel starts his polemic with data, noting the impact of bureaucracy on the economy. Research for the book suggests that out of a total labour pool of 146 million people in the US economy in 2018, there were 20.5 million managers and supervisors. In addition, there were also 6.4 million employees working in administration or support roles in areas such a human resources, finance, accounting and compliance, but excluding IT. The bureaucratic class, he says, therefore comprises 18.4 per cent of the US workforce and moreover, claimed $3.2 trillion in compensation or around one-third of total wages paid in America.

It gets worse. Consider the effect of all this bureaucracy on others. Hamel’s survey work suggests that US employees spend up to 27 per cent of their time on internal and external compliance, much of which falling into the category of bureaucratic busywork.

While bureaucracy has few champions, there are many who benefit from it.

“I don’t think I know anybody who would claim to be a defender of bureaucracy but there quite a few people who have learnt how to play the game well and are not necessarily anxious for it to change. A lot of managers have learnt how to defend their turf and hoard resources, deflect blame and manage up and it’s worked pretty well for them.”

The question is, how much of this bureaucracy could be dispensed with? More than you think, says Hamel.

Models are important and much of the book is devoted to case studies of companies that have slashed their bureaucracies or build powerful organisations without them. Post-bureaucratic pioneers such as Morning Star, Nucor, Spotify, Svenska Handelsbanken, and Sun Hydraulics prove it is possible to run large complex corporations with a super-flat structure and fewer staff.

He devotes an entire chapter of the book to Haier, the giant Chinese white goods company that has eliminated 12,000 middle managers and created a revolutionary internal entrepreneurial structure, with enormous impact on its growth and profitability.

Hamel can claim a hand in this. When Haier’s visionary chief executive Zhang Ruimin visited Hamel in California, having read his book The Future of Management, the author laid out a vision about building an organisation that was more of a network than a hierarchy.

“He said Gary, has anyone ever done it? I said, I don’t think so and he said, ‘we’re going to do it’. I asked why and I’ll never forget his reply. He said our goal will be to let every employee become their own CEO, to make every employee an entrepreneur because we believe people are an end and not a means to an end. So, they divided this big organisation of more than 60,000 people into 4,000 micro-enterprises. Each is just 15 or 20 people; each has its own P&L it runs in a little standalone business. Each is guaranteed three freedoms, the freedom to set their own strategy, to design their own roles and organisation and then to distribute the rewards of their success.

“All of these thousands of micro-enterprises are tied together through internal contracting. So, if I’m a little business making, let’s say, three-door refrigerators, I contract with other little micro-enterprises for design, HR, and so on. But critically, those are freely entered contracts. There’s no layers. It’s a company that has only two layers between those frontline teams and the CEO.”

In the book, Hamel makes a passionate argument for replacing bureaucracy with humanocracy, an organisational model that energises employees, encourages innovation and initiative, eliminates red tape and political games and reward efforts at all levels.

Achieving such change requires personal commitment on the part of those within organisations, who like Zhang, see a better way and Hamel suggests managers undertake experiments to create wins and gain traction. The problem of rewriting the management codebase needs to be disaggregated, he adds, with small teams empowered to work on individual components.

Hamel adds that organisations vest too much power in the people at the top. “Instead of a single fixed hierarchy we need a multitude of dynamic hierarchies where who’s in charge depends on the problem being addressed. We need organisations where everyone’s views are contestable.”

Bureaucracy is a powerful force, but Hamel says it can ultimately be defeated when a band of generous heretics decides to eschew it for their own integrity and for the sake of those who have been diminished by it. “Anyone who works in an organisation needs to ask, ‘where have I forfeited my principles for bureaucratic wins? How has bureaucracy made me less human’?”

Humanocracy: Creating Organisations as Amazing as the People Inside of Them, by Gary Hamel and Michele Zanini, is published by Harvard Business Review Press

A detox plan for bureaucrats

Hamel suggests a simple exercise of reflecting on your actions over the past few weeks and asking:

Did I subtly undermine a rival? In a bureaucracy, power is zero-sum. When a promotion arises, there is only one winner. It is tempting to discount the contributions of others or sow doubts about their integrity or competence.

Did I hold on to power when I should have shared it? In a formal hierarchy, the people who make the big decisions get paid most. To justify their superior status, they must be seen to be making the tough calls. This creates a disincentive to share authority.

Did I pad out a budget request or exaggerate a business case? Resource allocation in a bureaucracy is inflexible and conservative. Budgets are often set well in advance of allocation and anything that looks risky gets down-rated. Given this, it’s tempting to bid for more resources than you need.

Did I disregard the human costs of a decision? If your organisation treats people as mere resources, you may be pushed to make decisions that sacrifice trust and relationships for short-term business gain.

Did I fail to challenge a counterproductive policy? It’s easier and safer to whine about a stupid rule than to challenge a senior policymaker. Civil disobedience is never the safest choice, but systems don’t change until people take a stand.

Did I fail to back a promising idea or innovation? There’s not much glory in being an innovation mentor as its time consuming and often ends in failure. It’s easier to keep your head down than to champion a new idea but the result is inertia and incrementalism.