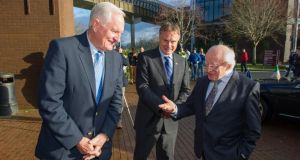 President Michael D Higgins has reminded senior executives of some of the world’s leading tech companies of the importance of moral leadership as the technology sector continues to grow at a rapid rate.

The President made his comments yesterday at a conference aimed at developing links between Limerick and Silicon Valley in California.

Opening the Irish Technology Leadership Group (ITLG) Silicon Valley Technology Forum at the University of Limerick, President Higgins told delegates that Ireland was the world’s “republic of creativity” and that science, technology and innovation would be at the centre of Ireland’s future.

Over 2,000 delegates attended the two-day forum, with senior executives from some of the world’s leading tech companies hoping to discover and invest in the next great technology idea.

Difficult choices
“With greater technology and scientific advancement comes increasing ethical dilemmas, with difficult choices and decisions to be made.

“With each new technological and scientific breakthrough come a set of challenging questions about equitable access to this technology and its potential impact on how its users, as citizens interact with each other as members of a shared community,” the President said.

In a discussion on “Growing Billion Dollar Companies”, Mr Barrett, who is also a former CEO of Intel, spoke about the pace at which high-tech companies move and the importance of keeping up with changing trends.

Referring to the failure of companies to make the transition from analogue to digital and from mobile phone to smart phone, Mr Barrett said: “If you don’t move and anticipate where it is going you are going to be left behind, and the market place is just littered with dead bodies who haven’t done that.”

Role of women
Ms Vandervelt said it was “critically important” to have women in key leadership roles. The successful entrepreneur and investor revealed that women control 70 per cent of global consumer spending.

“If you are developing companies or products and services that don’t even have representation of 70 per cent of the people that are buying these products, how are you going to get yourself in a leadership position to own that market?”

Memorandum
A memorandum of understanding between Limerick City and County Council, Limerick Institute of Technology, UL, Shannon Airport, Limerick Chamber and the ITLG was signed at yesterday’s event.

It is hoped that the agreement will cement the relationship with ITLG, and officially establish stronger commercial ties between Limerick and the midwest and Silicon Valley.

1 Basic income for all: Has the Covid crisis given us a new economic model?
2 ‘I don’t need to do any of this. . .I don’t actually need to work.’
3 How long can Government afford to keep State pension age at 66?
4 Promontoria barred from pursuing doctor over Ulster Bank loan
5 Online shoppers face unwelcome tax surprise
Real news has value SUBSCRIBE