Hedge funds bet on recovery by Argentina despite default 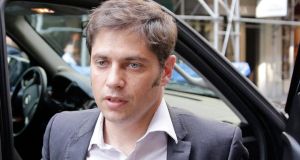 Axel Kicillof, Argentina’s economy minister: said “vulture funds” had rejected a renewed offer from the government and it was “impossible” to pay them more. Photograph: EPA/Jason Szenes

Some of the world’s largest hedge funds have been snapping up Argentine stocks, betting on an economic recovery in the troubled country despite it defaulting on its debt for the second time in 13 years.

Hedge funds have built positions in Argentina’s energy companies, banks and telecoms operators in a show of confidence that the clash between Buenos Aires and its holdout creditors will yet be resolved.

Standard & Poor’s placed Argentina’s credit rating on “selective default” on Wednesday after it failed to make a $539 million (€402 million) interest payment on its debt. The default rating will remain until Argentina makes its overdue June 30th coupon payment on its discount bonds maturing in 2033, it said.

Axel Kicillof, economy minister, said “vulture funds” had rejected a renewed offer from the government and it was “impossible” to pay them more.

The long-running saga between Argentina and its creditors has made Argentine debt more expensive to insure against default than any other country and costs have increased more than 11 per cent in the past week.

Analysts said that the complex nature of the default had left some investors hopeful that a resolution could still be reached, and that exchange bondholders stand to gain if a deal is struck with holdout creditors.

Dan Loeb, manager of the $14 billion US hedge fund Third Point, in a letter to investors this month said he had bought a stake in YPF, arguing “we are in the midst of a critical inflection point for the country”.

He wrote that if the government settled with its holdout creditors, “Argentina will regain access to global capital markets and solve its liquidity problem”. – (Copyright The Financial Times Limited 2014)

1 Bank leaked my loan request to family who tried to rip me off
2 Mastercard to create 1,200 new jobs by expanding base in Dublin
3 Boris Johnson's new immigration regime will damage much more than industry
4 US stocks have worst day in two years as coronavirus fears spread
5 EU and British positions harden ahead of Brexit talks
Real news has value SUBSCRIBE