Government must explain ‘inability’ to hold onto Web Summit 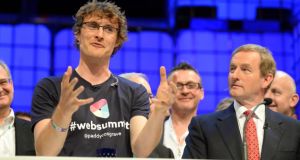 Taoiseach Enda Kenny described Paddy Cosgrave’s decision to relocate the Web Summit as “an individual choice”, saying it was not a question of the Government’s failure to reach Mr Cosgrave’s demands. Photograph: Eric Luke/The Irish Times

The decision to relocate the annual Web Summit tech expo to Lisbon from 2016 has been described as an embarrassment for the Irish Government on the international stage.

Speaking following Wednesday’s announcement by Web Summit chief executive Paddy Cosgrave that the tech event will be held in Portugal next year, Fianna Fáil spokesman on tourism Timmy Dooley said the Government must explain its “inability to hold onto a major event that was born in Ireland”.

Organisers of the event, which is expected to attract 30,000 attendees at Dublin’s RDS next month, say they have been considering a move away from Ireland for some time.

“The founders of the Web Summit have said they have chosen Lisbon because it has strong infrastructure, a growing start-up community and top class venue,” said Mr Dooley.

“The Government has some serious explaining to do. We know the Web Summit has genuine concerns about wi-fi at last year’s event and other issues have arisen in previous years.”

Taoiseach Enda Kenny described Mr Cosgrave’s decision to relocate the Web Summit as “an individual choice”, saying it was not a question of the Government’s failure to reach Mr Cosgrave’s demands.

Speaking at the National Ploughing Championships, Mr Kenny said the Web Summit had been a “great addition to Ireland’s reputation” and that authorities would look at how to improve facilities and other operations like it.

“Ireland is moving on and we have an enormous reputation internationally in terms of what we can do.”

Minister for Finance Michael Noonan said the tech event could always return to Ireland in the future. “Dublin is chock-a-block with business at present,” he said. “The hotels are full nearly every weekend so I don’t think that people will be disappointed. There is still a lot of alternative business, I hope.”

Chief executive of the Restaurants Association of Ireland Adrian Cummins said the move would lead to a loss of €7.5 million for the industry.

“We need to do what we need to do to get the Web Summit back to Ireland,” said Mr Cummins. “It has been a huge positive injection of cash into our industry at a vital time.”

Fianna Fáil TD Dara Calleary described the move as a major setback for the State’s plans to develop a “smart economy”.

“The organisers of the Web Summit have highlighted on a number of occasions in recent years that investment in infrastructure was needed in Dublin to support the technology sector,” said Mr Calleary. “The Government has a responsibility to ensure that the necessary investment in infrastructure takes place to support growth in the technology and research sectors. The presence of high-tech companies in Ireland should not be taken for granted.”

‘Not up to the task’

Green Party leader Eamon Ryan warned that the loss of the Web Summit was not just a bad sign for revenue but also recognition that Dublin’s infrastructure was not up to the task of hosting the event.

“We are going to hear a lot more of that problem as our economy grows in the next few years and the shortfall in housing, public transport and digital infrastructure starts to bite,” said Mr Ryan.

Chief executive of Dublin Chamber of Commerce Gina Quinn said the Web Summit organisers’ decision to leave Dublin should serve as “a wake-up call” to the Government and a reminder of how Dublin is in competition with other international cities for business.