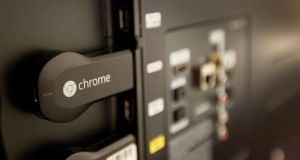 The new Google ChromeCast connected to the the back of a television. Photograph: Tony Avelar/Bloomberg 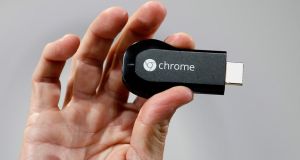 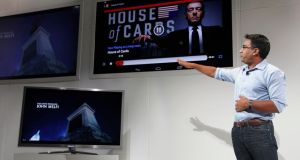 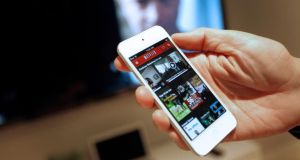 For Google, the move into televisions follows previously unsuccessful efforts by the company, including a media- streaming device called Q that never made it to market due to poor initial feedback. Photograph: Tony Avelar/Bloomberg

Google upped the ante in the battle for dominance of the livingroom entertainment stakes with the launch yesterday of a device that will allow users ‘cast’ content from their laptops, tablets and mobiles to their TV screen.

The Google “Chromecast”, a two-inch gadget resembling a memory stick, will plug into the television’s HDMI input port to act as a receiver for content and will also enable users use their smartphones as television remote controls.

The device will also allow the streaming of media from Google’s own properties, YouTube and Play, as well as Netflix. It is expected to work with music-streaming service Pandora and others in the future.

According to Google the device will require very little configuration. Users will need to plug it into their HDMI connection, connect it to WiFi, and will then be able to cast videos, photos and web content from their preferred device to the TV with just the press of a button.

The dongle-like device also enables users to continue using their phone for other activities while streaming.

“Of course people would want to watch YouTube and Netflix on the device with the biggest screen, but the user experience on the TV has been so difficult,” said Rishi Chandra, Google director of product management.

“If you have to stop using your phone just to watch something on TV, it’s not a viable solution.”

In a move away from the tendency of tech companies to ‘lock’ their customers into accessing media accessible only through their services or devices, Google has configured Chromecast to work across platforms including Android tablets and smartphones, iPhones, iPads and Chrome for Mac and Windows .

For Google, the move into televisions follows previously unsuccessful efforts by the company, including a media- streaming device called Q that never made it to market due to poor initial feedback. The Google TV set-top box has lagged the competition.

The move into the livingroom is not unique to Google and other companies such as Microsoft, Apple and Sony have a long-established presence in this area. But, priced at $35 and bundled with three free months of Netflix, the inevitable move to connect wireless devices with TVs is likely to be keenly watched.

The Chromcast has already gone on sale in the US but an Irish release date has not yet been made known.

4 The Irish Times Business Person of the Month: Matt Cooper