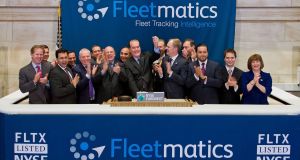 Dublin-based software company Fleetmatics is set to hire an additional 75 people in Dublin as it expands its research and development operation, eyeing further growth.

The new roles, due to be filled by 2018, will bring the number of people employed by the company in Ireland to more than 200. Worldwide, Fleetmatics employs more than 1,200 people. The new roles include everything from front-end programmers and developers to data analytics.

The company, which provides mobile workforce solutions for service-based businesses, said it was expanding its research and development team to support its ongoing growth, particularly in international markets. The plan for expansion includes the development of a new network operations centre in Tallaght to house the company’s operations and application support engineers.

Chief technology officer and co-founder Peter Mitchell said recruitment had already begun and, at the current rate, the company was likely to fill the roles in advance of its 2018 deadline. Although some candidates would come from overseas, Mr Mitchell said he was confident of filling at least some of the jobs locally. “It’s a lot easier to find talent here now,” he said.

Fleetmatics has put in double digit growth in revenues in recent years, with its most recent accounts showing first quarter revenue jumped 21 per cent. In 2015, it reported a rise in revenue of 23 per cent to $284.8 million in 2015. For the full year, the company is targeting revenue of between $342 million and $346 million and adjusted ebitda in the range of $113 million to $117 million.

With its global headquarters in Tallaght, Fleetmatics also has offices in the US, Britain and Italy, some as a result of acquisitions in the past six years. Founded in 2004 with the merger of Irish technology firms WebSoft and Moviltec, Fleetmatics initially had 10 employees in a small office. The company floated on the New York Stock Exchange in 2012, raising $125 million.

Fleetmatics develops and sells fleet-management software to 37,000 businesses with more than 737,000 vehicles across multiple industries. Its technology tracks the location of vehicles and gives fleet operators information on everything from location and speed to fuel usage and delivery times.

The company counts DHL and South Dublin County Council among its customers.

Among its more recent deals is a four-year agreement with An Post to support more than 900 vehicles.

In the US, it has made inroads into the telecoms industry, signing up Comcast and Time Warner Cable.