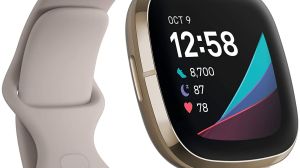 Where to buy: www.fitbit.com

Fitbit’s army of smartwatches and fitness trackers just got a little smarter, with the launch of the Fitbit Sense.

The latest device from the Google acquisition target is a step up from the Versa 3, adding new sensors and teaming up with the Fitbit Premium service to offer new insights into your health.

Although the Sense looks a bit like the Versa, it’s probably closer in functions to the Ionic. It has built-in GPS, for example, and includes an electrodermal activity sensor that can monitor your stress levels, and a sensor to keep track of your blood oxygen levels while you sleep.

The watch itself is light and comfortable to wear, with the case made from stainless steel and the display just a touch under 1.6 inches in size. That means it is big enough to pick up your notifications from your smartphone, track your exercise and check in on your stats.

The click button has been replaced with a touch-sensitive one.Although it took a bit of getting used to – you need to make sure your finger covers the entire button – the haptic feedback means that although it will never feel exactly like pressing a physical button, the sensation is close.

That button can be programmed for a number of functions. A double press will access your personally chosen four favourite apps; press and hold can be mapped to an app of your choosing, Fitbit Pay, Alexa or music controls.

Unlike the Apple Watch and other rivals, the blood oxygen monitor only works while you sleep. You can’t dip into it during the day as and when you feel like it.

To get it to work, though, you need to download the SpO2 watch face from the Fitbit app and enable it on your device. It wasn’t installed as standard, which seems like an oversight; it is one of the main draws of the Fitbit Sense.

While you sleep, the sensor will monitor your blood oxygen levels, giving you an indicator of any problems that may be lurking.

The second big addition is the EDA sensor that can monitor you for signs of stress. You do a quick EDA scan at any point in the day, taking a couple of minutes to monitor your stress levels, or you can try out some guided meditation to bring your stress levels under control. It accurately flagged rising stress levels for me on several occasions, although I’ve heard mixed reports from other reviews.

The device also has a skin temperature sensor. Once you have worn the device for three nights, it has a baseline and it can then monitor trends over time. That can also be viewed through the SpO2 watchface.

It’s all about getting an overall picture of your health. Each of these new sensors taken in isolation provides an interesting talking point, but when the numbers are crunched in the app and your trends start to show, it can alert you to a potential health issue. Blood oxygen levels and temperature could be an early sign of a respiratory infection, for example.

So the app plays an important role. You can get away with the free version for the most part, although the Fitbit Sense does come with a six-month free subscription to Premium, so you’ll know what you’re missing when it runs out. While the free app will give you a brief insight into how you are training, sleeping, or what your trends are, the premium service digs a little deeper and gives you a longer-term view of things.

Battery wise, the Sense will give you almost a week between charges, unless you enable the always-on watchface. Then you’ll see the battery life dwindle to two days.

But there are good reasons for using the always-on watchface. For example, if you are walking or hiking, you can see real-time stats on the watch. The Sense has built in GOSPS rather than connected GPS, so you can rely solely on the watch to track your distance and so on.

Up until the final day of the review, the ECG function wasn’t active, as it had been awaiting approval in the EU and US before it was rolled out. It’s easy to take a reading: open the ECG app, make yourself comfortable and place your index finger and thumb on the opposite corners of the metal frame for 30 seconds. The app can flag atrial fibrillation, or irregular heart rhythm, which should prompt a trip to the doctor. However, it’s important to keep still during the measurement; if your heart rate is too high, the Sense won’t be able to read your heart rhythm.

The Sense also includes Amazon’s smart assistant Alexa, as the Versa 2 did. This is still a one-way relationship for now; you can ask Alexa something, but she won’t reply. But since the Sense has a speaker – unlike the Versa – that function is one of the features that is planned for the future. For now, the answer to your query will appear on the screen, so your privacy is protected.

Another future feature is the ability to take calls and answer texts when your phone is nearby, and you will also be able to swap between Google Assistant and Alexa as your preferred digital assistant.

The Sense strikes a balance between fashion and function, adding some useful health sensors that can contribute to an overall view of your health. It’s not prohibitively expensive either.

The SpO2 sensor in the watch can only monitor your oxygen levels at night, so if you want something that will monitor during the day you will need to look elsewhere.

The EDA sensor seems like a good idea but, in reality, I rarely remembered to do it. There are some good features coming down the line too, including the ability to swap out Alexa for Google Assistant and vice versa.

Trump vs Biden: Stakes are high for the Irish economy 05:43
Diagnostics company Diaceutics launches €26m precision medicine platform 05:38
Will remote working become the norm? 05:30
‘Going abroad forced me to challenge assumptions that I had’ 05:28
Tighter regulations for car makers will drive buyers to choose electric 05:21

1 Trump vs Biden: Stakes are high for the Irish economy
2 Will remote working become the norm?
3 How long can Government afford to keep State pension age at 66?
4 ‘Going abroad forced me to challenge assumptions that I had’
5 Developers fail to stop receiver selling €60m Dublin City Quay property
Real news has value SUBSCRIBE