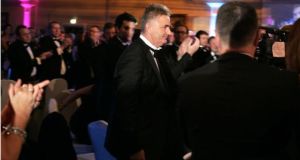 First Derivatives, the Newry headquartered AIM-listed company, has agreed a £36 million (€45 million)deal to increase its shareholding in a Californian software company to more than 65 per cent.

The Northern Ireland company - which provides trading and risk management software systems and consulting services to the capital markets industry - previously had a 20 per cent stake in Kx Systems (Kx).

The Palo Alto based company is one of the world’s leading big data vendors, its lead product kdb+ is widely used by exchanges, regulators and hedge funds and Kx currently lists nine of the top ten investment banks among its customers. It has also recently signed major deals in the oil, gas, pharmaceutical and utilities sector.

Brian Conlon, who founded First Derivatives in 1996 and is its chief executive, said the deal will transform the landscape for both the Newry firm and Kx.

“Transformational is a term often overused in the technology industry, but in this case I can confidently use it to describe the impact this transaction will have on our collective prospects,” Mr Conlon said.

He believes the deal will give First Derivatives the “complete technology stack to address the Big Data issues prevalent in today’s market”.

“It allows the group to offer customers the alternative of either building big fast data solutions using kdb+ and First Derivatives’ consulting talent or buying applications using Delta, which is powered by kdb+. “

“While the group is currently focussed on capital markets, the deal provides a clear path to expansion into other vertical markets,” First Derivatives said in a regulatory statement.

Under the terms of the new deal the co-founders of Kx; Arthur Whitney and Janet Lustgarten will continue in their current roles while Ms Lustgarten is also expected to join the board of First Derivatives.

She believes the Newry company’s “deep pool of engineering talent and its global footprint” will help accelerate the firm’s growth and also bring its products to a wider audience.

“We have been successfully focused on Wall Street for 20 years because of the large data sets they have. Now because the Internet of Things is generating large data sets in other industries we need to grow to be able to address these new opportunities,” Ms Lustgarten added.

First Derivatives said it intends to make “significant investments” in Kx to enable its founders to scale the company.

To support the financing of its latest share purchase and other potential investments the Newry company said it had agreed a new five year loan facility of £24 million with Bank of Ireland.

First Derivatives expects its enhanced stake in Kx to be “earnings enhancing in the current financial year”.

1 Ryanair and Aer Lingus monitor impact of conronavirus on travel to Italy
2 Bank leaked my loan request to family who tried to rip me off
3 Mastercard to create 1,200 new jobs by expanding base in Dublin
4 Boris Johnson's new immigration regime will damage much more than industry
5 Nineteen staff made redundant by Nama share €1m
Real news has value SUBSCRIBE