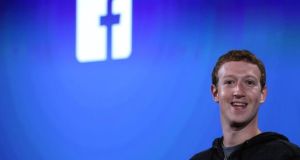 “No one in the history of the world has ever done something like this,” said Facebook chief executive Mark Zuckerberg on the WhatsApp deal. Photograph: Getty

Shares in Facebook fell by 5 per cent in after hours trading on Wall Street after it announced plans to acquire mobile-messaging application start-up WhatsApp for $16 billion in cash and stock.

The transaction involves $4 billion in cash, $12 billion in stock and $3 billion in restricted stock that vests over several years. The WhatsApp deal is worth more than Facebook raised in its own IPO and underscores the social network’s determination to win the market for messaging.

Founded by a Ukrainian immigrant who dropped out of college, Jan Koum, and a Stanford alumnus, Brian Acton, WhatsApp is a Silicon Valley startup fairy tale, rocketing to 450 million users in five years and adding another million daily.

“No one in the history of the world has ever done something like this,” Facebook chief executive Mark Zuckerberg said on a conference call.

Mr Zuckerberg, who famously closed a $1 billion deal to buy photo-sharing service Instagram over a weekend in mid-2012, revealed that he proposed the tie-up over dinner with Mr Koum just 10 days earlier.

Facebook’s shares rallied following the conference call but were still 2.64 per cent down on the preceding day.

WhatsApp was the leader among a wave of smartphone-based messaging apps that are now sweeping across North America, Asia and Europe. Although WhatsApp has adhered strictly to its core functionality of mimicking texting, other apps, such as Line in Japan or Tencent Holdings Ltd’s WeChat, offer games or even e-commerce on top of their popular messaging features.

Shares in Blackberry rose by as much as 9 per cent following the announcement.

BlackBerry chief executive John Chen, named to run the company in November after a scrapped sale attempt, has singled out its BBM messaging service as a pillar for growth to help revive the struggling smartphone maker.

The new deal provides Facebook entree to new users, including teens who eschew the mainstream social networks but prefer WhatsApp and rivals, which have exploded in size as private messaging takes off.

Mr Zuckerberg and Mr Koum on the conference call did not say how the company would make money beyond a $1 annual fee, which is not charged for the first year. “The right strategy is to continue to focus on growth and product,” Mr Zuckerberg said.

Mr Zuckerberg and Mr Koum said that WhatsApp will continue to operate independently, and promised to continue its policy of no advertising.

Many investers balked at the price tag.

Facebook is paying $42 per user with the deal, dwarfing its own $33 per user cost of acquiring Instagram. By comparison, Japanese e-commerce giant Rakuten just bought messaging service Viber for $3 per user, in a $900 million deal.

Venture capitalist Sequoia Capital, which invested in WhatsApp in February 2011 and led three rounds of financing altogether, holds a stake worth roughly $3 billion of the $19 billion valuation, according to people familiar with the matter.

Facebook was advised by Allen & Co, while WhatsApp has enlisted Morgan Stanley for the deal.