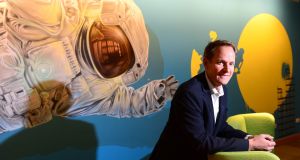 It has been a busy week for Facebook. The social network announced it is planning to launch a satellite in 2016 to provide internet access to remote parts of Africa. It also unveiled a new “reactions” button, which will be an extension of the “Like” button”.

This is against the backdrop of Europe’s highest court finding a pact that helped Facebook send users’ personal data from the EU to the US was invalid. The European Court of Justice ruled American tech companies like Facebook can be barred from passing European citizens’ private data to US authorities.

It was Austrian campaigner Max Schrems’s’ dogged pursuit of Facebook data collection that resulted in the landmark ruling, which declared the 15- year “Safe Harbour” agreement between the EU and US invalid.

The agreement gave US spy chiefs access to the online data of millions of citizens, and Schrems claimed Ireland’s data watchdog had an onus to uncover what information Facebook held on users, and ultimately what was being transferred to the US under Safe Harbour and being accessed through “Prism”, a US intelligence services programme.

Facebook’s use of its members’ data will now be scrutinised by the Irish Data Protection Commissioner, after the judges said the DPC was wrong to dismiss the Schrems case as “frivolous and vexatious”.

The social network says it relies on a number of the methods prescribed by EU law to legally transfer data to the US from Europe, aside from Safe Harbour, and that the main issues of the case are beyond the remit of the company’s Irish head Gareth Lambe.

Lambe, who has been with Facebook for four years, previously ran its advertising operations (responsible for the advertising campaigns – on desktop and mobile – of all the largest advertisers in EMEA), and also served as acting head of office for Facebook Ireland in 2013.

As Facebook’s chief in Ireland, he looks after more than 1,000 employees, who in turn look after huge numbers of Facebook users globally.

He says just 17 per cent of Facebook’s global users are in the US. The remaining 83 per cent are serviced and managed out of the social network’s international headquarters in Dublin.

“Over one billion users per month are serviced through Dublin,” he says.

“Two years ago we were about the Facebook app; now it’s a family of apps, including Instagram, Whatsapp and Messenger,” he says.

One of Facebook’s key business priorities globally is supporting small and medium businesses, and its Dublin-based SMB team helps businesses from across Europe find new customers and grow their companies, Lambe says.

The social network has come a long way since October 2008, when it first announced it had chosen Dublin as the location for its international headquarters.

Back then, Carzone.ie released statistics that showed more Irish people were browsing the car sales site than Facebook. The figures, verified by the Audit Bureau of Circulations, showed the site attracted 763,569 unique users a month. Facebook Ireland was attracting 200,000 unique users a month.

Facebook has far surpassed the online showroom now, with 2.5 million people in Ireland using the social network every month now. Of these, 2.2 million log in from a mobile device.

“Six years ago, we had a landing team of just 30 people. We now have over 1,000 people with 68 nationalities. This building’s capacity is 1,100 to 1,200, but we are looking to expand into the next premises. We are fitting the premises next door out right now and have some people in there already,” Lambe says.

Lambe says the availability of talent was one of the reasons Facebook chose Ireland, but competition for good workers is still tough.

“We are competing to get the best people. We pay well above the industry average. We give free breakfast, lunch and dinner . . . we pay for gym membership.

“It’s always hard to get good people. We could hire 500 people tomorrow, if we didn’t have the filters we have. All the big firms poach people from each other but that’s good on one hand.”

Facebook is also planning to build a €200 million data centre in Clonee, Co Meath, which will employ approximately 100 people once opened. The construction of the 18,580sq m (200,000sq ft) data centre will employ thousands more.

“We are hopeful of getting planning permission, but we’re not over the hump yet. It would be great for our footprint here.”

Lambe studied international commerce with Spanish at UCD: “My mother is Spanish, so I was fluent. It was the easy option,” he says.

He began his career working for Enterprise Ireland in New York, before joining Pernod Ricard, where he worked as the brand manager for Jameson, West Coast Cooler and various wines.

“I managed the marketing budget for brands. I learned all about marketing, brands and dealing with advertising agencies and multiples.”

He was one of the first four members of the Pigsback.com team, which he spent almost nine years as part of. He initially worked as head of marketing, before getting into the business development side, progressing to managing director in Ireland, Canada and the UK.

“We set up Pigsback in February 2000. The dotcom bust happened in March 2000. Luckily, we had done our funding round already.”

He later joined PayPal as the director of merchant operations for Europe, the Middle East and Africa, running the account management, telesales, business support and integrations teams out of the company’s Dublin offices.

“I had 300 people under me. It was a culture shock going from a start-up to that.”

“When the opportunity came to join Facebook, even though it was a risk as it was pre-IPO, I took it.”

Lambe is a pro at interviews, so is unfazed by any question.

“I did 14 interviews with PayPal and 11 with Google, all within the space of three weeks. I only had to do 10 with Facebook, so it was easier,” he says.

I later ask whether Facebook has too much power, especially considering one billion people, or one in seven people on earth, used the social network in a single day in August of this year. “There has never been a platform of this scale before. I understand the scrutiny we are under.”

“The focus we put on privacy has increased over the years . . . it’s something we spend a lot of time and energy on. Whatever about the early years, I’d say we are best in class now.”

The social network says it has done nothing wrong in transferring data between the EU and US; that it has had other ways to legitimately transfer data from Facebook Ireland to Facebook Inc for many years; and that it also has a registration process that allows it to obtain consent from people who choose to use Facebook.

The company is to begin testing a “reactions” button in Ireland and Spain, which is an extension of the “Like” button and will give people more ways to share their reaction to a Facebook post in a quick and easy way – whether that’s updates that are happy, sad, funny or thought-provoking.

It will be interesting to see what reactions people give to any post on the Schrems case and ECJ ruling. CV Name: Gareth Lambe Position: Head of Facebook Ireland Age: 42 Lives: Monkstown, Co. Dublin Family: Married with three children aged 6, 8 and 9 . Education: Bcomm International from UCD and ACC Diploma in Financial Management from DIT. Something about you that would surprise readers: With a Basque mother, Gareth is fluent in Spanish. Something about you that readers would expect: Gareth has spent 15 years in the tech industry – beginning with the Irish start-up Pigsback.com before moving on to the US multinational arena with PayPal in 2008.