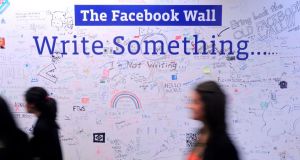 The social network will today submit a planning application for €200 million new data centre in Clonee. The investment in the data centre will bring Facebook’s Irish staff numbers to over 1,000. Hundreds of other jobs will also be created during the construction phase.

“We have one of the youngest, well-educated populations in Europe and it’s excellent and very encouraging to see that these companies are continuing to pick Ireland as a source of investment,” Mr Murphy said.

EU member states are expected to give political sign off today to new EU regulation on data protection that will replace the current directive which dates from 1995.

To date, the negotiations have proved highly contentious given concerns among a number of member states, particularly France and Germany, about data privacy protection. If agreed, negotiations will then being with the European Parliament, with a final agreement expected by the end of the year.

Given that many of the world’s biggest internet companies including Google, Facebook and LinkedIn have their European headquarters in Dublin, Ireland will be particularly affected by the new laws.

Speaking ahead of the meeting the Minister for Data Protection said that Ireland had nothing to fear from the new regulation which is introducing a ‘one stop shop’ model which will allow companies and citizens to deal with data protection authorities in their own member state.

The current system has led to citizens in other EU member taking cases against the Irish data protection commissioner in the European courts.

Minister of State Dara Murphy said that the Irish Data Protection authorities will continue to regulate companies located in Ireland – a key demand for Ireland since negotiations on new EU data legislation began four years ago.

“Our ambition was originally that there would be a “one stop shop” system, a single point of entry for citizens and companies that would allow companies that are based in Ireland will deal with the Irish data protection office. I’m very optimistic that this will be agreed today,” Minister Murphy said.

He also stressed that Ireland would continue to regulate internet companies effectively, despite criticism of Ireland’s data regulation regime from some member states.

“The fact that we have a very significant footprint of these businesses in our country doesn’t in any way undermine our ability to regulate them. In fact the new regulation will have a pan European set of rules for everybody - the rules will be very clear,” he said, nothing that the European Union has been operating under a 20 year old directive which allowed for different interpretations in different member states.

“As we always do in Ireland we will be not found wanting at all when it comes to the regulation and the enforcement of these rules that we’re agreeing today. We have a strong tradition of independent regulatory bodies in the state and our data protection in particular, while may have been under-resourced in the past, now has significant new resources for the future.”

Funding for the Office of the Data Protection Commissioner was doubled in the last budget, while a new office is being established in Dublin to complement the current headquarters in Co Laois.

4 Growing the economy, not cutting debt, must be our priority