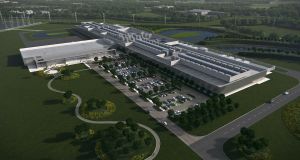 This will be the second data centre the company has built outside the US – the first was Lulea in Sweden, which opened in 2013

Facebook has confirmed it will proceed with the construction of a new data centre in Co Meath.

The €200 million centre, which is planned for a site in Clonee, Co Meath, is due to start construction in the next couple of months and will come online by early 2018 at the latest.

The company intends to build an initial 31,000sq m facility on the site, with planning permission for a second building already granted.

The project is expected to support about 2,000 jobs during the construction phase.

This will be the second data centre the company has built outside the US; the first was Lulea in Sweden, which opened in 2013. The Swedish facility employs about 150 people, and it is understood the Irish centre will employ a similar number of operations staff.

Meath County Council has welcomed the announcement that Facebook will begin building a €200 million data centre near Clonee, Co Meath, in the next couple of months.

Council chairman Brian Fitzgerald said the investment in Meath by Facebook is a “sends out the message that Meath is an attractive place to invest in and to do business. This is a very important project for Ireland and for the county and very good news for the community in Clonee.”

The chief executive of Meath County Council, Jackie Maguire said, “the hard work with all the stakeholders including IDA Ireland to attract this world class enterprise to Meath has paid off. This project will bring additional jobs to the county and a welcome stimulus to the local economy.”

Meath County Council granted planning permission for the centre in July 2015 and, following an unsuccessful appeal to An Bord Pleanala by local residents in October, Facebook has decided to proceed with construction.

The company intends to build an initial 31,000sq. m. facility on the site, with planning permission for a second building already granted. This will be the second data centre the company has built outside the US; the first was Lulea in Sweden, which opened in 2013.

Facebook CEO Mark Zuckerberg said: “We’re glad to be investing in Ireland, to become a part of the Clonee community, and to continue building the massive infrastructure that connects our global community. Clonee Data Center will be one of the most advanced and energy efficient data centres in the world. It will feature the latest server, storage and network designs developed through the Open Compute Project, and will be powered by 100 per cent renewable energy.”

“Ireland has been home to Facebook’s international headquarters since 2009 and we’re excited to be investing further here,” said head of Facebook Ireland Gareth Lambe.

“We want to innovate in Europe and for Europeans, and the Clonee data centre will house some of the big breakthroughs Facebook has made in this area. Like its predecessors, this project will generate hundreds of millions of euros in economic activity and support hundreds of jobs in the local community.”

The centre will use technology designed by Facebook’s open source Open Compute project, said Niall McEntegart, Facebook’s director of datacentre operations for EMEA and APAC. “There’s an ongoing need for more infrastructure capacity. It [the Clonee site] is excellent from a construction point of view. It’s pretty much shovel ready, with a really good power and network infrastructure.”