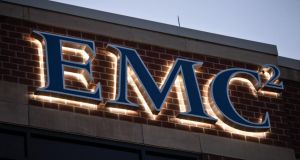 The data-storage company has agreed to be acquired by PC maker Dell for $67bn. Photograph: Kayana Szymczak/Getty Images

EMC, which has agreed to be acquired by PC maker Dell for $67 billion, will this week post financial results for the third quarter.

The company is expected to report revenue in the range of $6.05-$6.08 billion, lower than the analysts’ estimates of $6.25 billion. The data-storage company announced preliminary results for third-quarter last week, following news of its merger with Dell.

It has forecast earnings below analysts’ estimates due to a higher than expected build in unshipped storage product orders. EMC, which employs more than 3,000 people in Ireland, forecast reported earnings of about $0.25 per share, adjusted earnings of about $0.43 per share. The business also recently declared a quarterly dividend, which will be paid this Friday. Shareholders of record on October 1st will be paid a $0.115 dividend.

Meanwhile, EMC-controlled VMware forecast third-quarter earnings of $0.60 per share, up 35 per cent year over year, and adjusted earnings of $1.02 per share.

VMware projects third-quarter revenues of $1.672 billion, up 10 per cent from a year ago and up 14 per cent in constant currency.

Dell will buy EMC in a deal valued at about $67 billion, the largest on record in the technology sector. The deal will help the PC maker tap into the faster-growing and lucrative market for managing and storing data for businesses amid waning demand for personal computers globally.

The deal will be financed through a combination of new equity from Michael Dell, MSD Partners, Silver Lake and Singapore state-owned investor Temasek Holdings, as well as the issuance of the tracking stock, new debt and cash on hand. VMware will remain an independent, publicly-traded company.