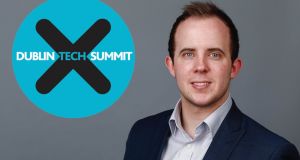 Dublin Tech Summit organiser Ben English: “We want to build a positive international message out of the tech summit.”

The Web Summit may have departed for Lisbon, but another technology conference wants to ensure Dublin remains a focal point on the global conference map.

The Dublin Tech Summit is aiming to attract more than 10,000 attendees to the Convention Centre next February, reaffirming the capital’s reputation as a strong place for enterprise, technology and innovation.

“We want to build a positive international message out of the tech summit,” conference organiser Ben English said.

Uber’s lead engineer Rafi Krikorian, MongoDB chief marketing officer Meagen Eisenberg and Adblock chief executive Till Faida are among the speakers for the event, which will take place on February 15th and 16th.

The conference will focus on seven themes: business, fintech, the internet of things, medtech, big data, social enterprise and creativity. Organisers are expecting more than 200 speakers and investors.

Mr English said the event would be a more intimate affair than Web Summit. “We’re focused on bridging the gap between start-ups, scale-ups and established companies . . . Attendees are saying they want to build relationships in a more intimate conference venue.”

The summit will invite start-ups, companies, investors and entrepreneurs to a number of events over the course of the next year, with the first on May 27th, when conference organisers will open the London Stock Market.

Two-for-one tickets will be available from this Wednesday at a price of €396.

After that, the price will be €396 per ticket, according to Mr English.