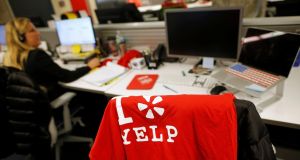 Yelp, which recorded net income growth of 30 per cent in the third quarter, declined to clarify the precise impact on its Dublin office. Photograph: Jim Young/Reuters

Fears are growing for up to 100 jobs at web company Yelp’s European headquarters in Dublin, after the Californian-headquartered business review site told analysts it will shut most of its international operations.

Yelp, which announced strong third quarter results on Wednesday, said it will cut up to 175 sales and marketing roles at its offices outside North America. It intends to refocus its resources on its home market.

The company did not specify where the axe will fall, but it said it intends to “maintain and grow” its engineering teams in London and Hamburg.

Its only other offices in Europe are in Dublin, its international headquarters, and in the Swedish capital Stockholm. It also has small offices in Taiwan and Brisbane.

“This was not an easy decision as it may impact up to 175 of our valued employees abroad. While they perform their jobs admirably, our strategy has not panned out,” said Jeremy Stoppelman, the company’s chief executive.

Lanny Baker, Yelp’s chief financial officer, told analysts in a conference call on Wednesday that its international sales and marketing function would be “wound down” over coming months. He said it expected to incur one-off restructuring costs of up to $4 million, mostly in redundancy payouts.

Yelp announced the creation of 100 jobs in Dublin, mostly in sales and marketing, only two years ago with the opening here of its international headquarters. Senior executives at other Irish-based technology companies speculated on Wednesday night that Yelp may shut its Dublin operations completely.

The company, which recorded net income growth of 30 per cent in the third quarter, declined to clarify the precise impact on its Dublin office.

“The announcement primarily affects sales and marketing roles, and many of those roles were also held in London and Hamburg, as well as remote (non-office based) employees,” said Shannon Eis, its head of communications.

1 How can I view my dead brother’s will if I’m not the executor?
2 Barry’s Hotel at €8m comes with potential to double in size
3 Applications for 961 new homes in Dublin and Meath rejected
4 Michel Barnier rejects UK’s call for Canada-style trade deal
5 Walmart disappoints with weak sales volumes over Christmas
Real news has value SUBSCRIBE