Drones deliver for ‘Irish Times’ reporter who picks up award 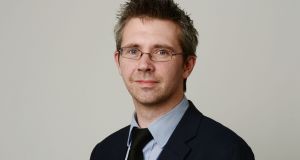 Irish Times journalist Mark Hilliard has been named technology reporter of the year at the Business journalism awards.

He won for a feature entitled ‘As the drone era has taken off let’s ensure our safety and privacy’.

The award for economic commentator went to Richard Curran of Independent News & Media for contributions on farmers’ borrowing, the gambling industry and the culture of tax avoidance.

The Business Analyst Award went to Brian Carey of the Sunday Times, while Emma Kennedy and Jack Horgan Jones, both of the Sunday Business Post, picked up aards for specialist business reporter and upcoming journalist of the year respectively.

Along with the seven categories winners, an Outstanding Achievement Award was presented to Matt Cooper for his contribution to business journalism for over 25 years as a business reporter, business editor, broadcaster and author.

A further award was also presented for Business Book of the Year which is nominated and voted for by UCD Business faculty members and rewards outstanding achievement in writing a business book on a topic that offers enhanced understanding and insight. The 2015 recipient for the award is John Kay for his book entitled, Other People’s Money: Masters of the Universe or Servants of the People?

Professor Ciarán Ó hÓgartaigh, Dean, UCD Business, said: “Now in its ninth year this programme truly represents the very best of business journalism in Ireland. The individual journalistic work and the collective body of their reportage enriches our understanding of important issues of the day and, through its influence, helps shape the corporate landscape. In 2015, the depth and breadth of talent in Irish media was once again evident in the high quality of entries received, and in the standard of the winning submissions.”

Richard Moat, CEO, eir, sponsors of the awards, said: “eir is delighted to partner with UCD Michael Smurfit Graduate Business School in sponsoring this awards programme. In our three years’ sponsoring the awards we have seen the highest standards of business journalism recognised and this year is no different. Recognising this excellence is important as it plays a crucial societal role in educating the public, challenging the status quo and, where necessary, holding business to account in the public interest.”

1 MSD buys Takeda biologics plant in Dunboyne
2 ‘Saudi Arabia is where the opportunities will happen in future’
3 Staff put Microsoft in ethical hot seat over army contract
4 Charting the stock markets: does technical analysis work?
5 Elderly parents living in property you own will save you on capital gains tax
Real news has value SUBSCRIBE