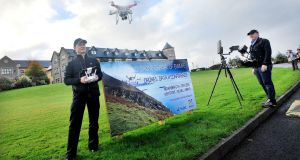 Romeo Durscher of DJI and Declan Mallen of IFLY Technology, guest speakers at the Drones and Data Conference in Westport. Photograph: Conor McKeown

If Santa Claus opts for drones over reindeer for deliveries this Christmas, he will only be permitted to use Irish airspace if he is on the State’s remotely piloted aircraft register.

The new drone register, which will be one of the first of its kind in Europe, will be up and running by December 21st, according to Irish Aviation Authority director of safety regulation Ralph James.

Every drone or remotely piloted aircraft (RPA) over one kilo in weight would be required to sign up, with the legislation also applying to model aircraft, Mr James, formerly Defence Forces deputy chief of staff, told the Drones, Data X conference in Westport, Co Mayo.

He said the aviation authority had designed a new app as part of the register, which would tell those licensed drone users where they could and could not fly. It was estimated that there were 5,000 drones in Ireland, but the systems were also a “number one toy” on shopping lists this Christmas, Mr James added.

The IAA has already issued a series of guidelines. For now, they must comply with model aircraft rules if used recreationally, but must have IAA permission if used for commercial, government or research purposes.

However, he said, the authority hoped that its new register and app would be “easy, realistic and acceptable” and would be a model for Europe, while also supporting Ireland’s opportunity to become a “centre for the drone industry”.

Privacy was one of the biggest public concerns about drones and the IAA was working with the Garda and the data protection commissioner on a “whole government approach” to their use, he said.

The use of “geofencing” to ensure drones do not fly in areas where they may disturb wildlife, invade privacy or pose a safety or security threat was also a theme of the “drone summit”, which was held for the second year running in Co Mayo and included a trip to Achill island.

Camera drone developer DJI.Com’s director of education Romeo Durscher said that areas could be “geo-fenced” using GPS co-ordinates and it provided an opportunity for “safe integration” of the technology.

“Changing public perception” that drones were military machines designed to kill was a challenge for manufacturers of the commercial devices – now available for as little as $800, he noted.

Drones for military purposes are still very much part of the arms industry, but Mr Durscher and other speakers were keen to stress that some of the best civilian technology was originally designed for military use.

“Education and smart legislation is very important for the industry,” Mr Durscher, who formerly worked for US space agency Nasa in California, said.

The Defence Forces were also looking at 3D technology as an “enabler” to provide spare parts for military equipment in remote locations, be it in south Lebanon or 500 miles off the west coast, he said.

Verifly founder and chief executive Jay Bregman said drones were “democratising aviation” in a way that the internet “democratised communication”. Mr Bregman, a co-founder of the Hailo taxi hailing app, said his new start-up, with a base in Dublin, had developed one of the most advanced “geofencing” systems anywhere.

The unmanned aircraft, named Aquila, is described as having the “wingspan of a 737 but the profile of a stealth fighter”.