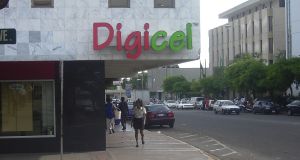 Digital is pivoting away from being a pure mobile operator and wants to expand into cable television, high-speed fibre and corporate services

Directors of Digicel have told investors it is prepared to spend $400 million on up to 15 acquisitions as the group pivots away from being a pure mobile operator and expands into cable television, high-speed fibre and corporate services.

The recording was made as part of a roadshow in the lead- up to Digicel’s flotation, which it hopes will raise in the region of $1.7 billion, valuing the Caribbean-based telco at about $10 billion, including debt. October 7th was suggested as a possible date for the flotation.

Mr O’Brien, whose 60 per cent post-flotation stake will be worth close to $3 billion, will not take a dividend from the flotation, but his Island Capital corporate finance business could yield up to $20 million arising from the transaction.

The flotation documents reveal Island, an advisor to Digicel, is due a 0.5 per cent fee of the gross flotation proceeds, which would be $10 million if it hits the upper end of its price range and raises $2 billion.

Digicel is also “obligated” to pay Island 0.5 per cent of the value of other deals such as acquisitions, tender offers and other capital transactions.

This suggests Island would be line for a fee as part of the debt paydown.

If Digicel also spends the remaining flotation proceeds on acquisitions, Island would pick up another payout similar in size to its fee on the flotation.

“We think this is an opportunity to delever the business and raise capital to take advantage of a number of deals where we are preferred bidder,” Mr O’Brien told investors.

Mr Delves said “there are 15 opportunities we are looking at closely, and we are confident we will buy them at the right price”.

Mr Hickey said the target of at least $400 million would be “largely used for mergers and acquisitions”.