Apple listed about 40 apps as it unveiled its smartwatch 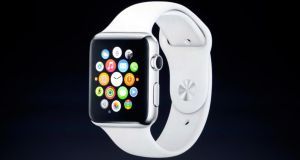 Watch apps showcased by Apple so far are mostly extensions of services like Uber, American Airlines and Twitter.

Software developers say it will not be easy to come up with a “killer app” for Apple’s Watch - few have seen the product and the software is still in test mode.

While app makers are passionate about developing for the Apple Watch, some are skeptical about the prospects of coming up with a big idea for the little computer on a wrist that hits stores on April 24th, said Markiyan Matsekh, product manager at software engineering firm Eleks.

A killer app that grabs consumers’ attention will be key to the success of the Apple Watch and could spawn new companies, as the iPhone did. The photo-sharing app Instagram grew into a $1 billion business bought by Facebook, and Snapchat has gone from a mobile messaging app to a company valued at $19 billion.

Apple has blocked some features, such as the gyroscope and accelerometer, on the development kit, and the watch simulator cannot test all functions, developers said. Apple declined to comment on why developers cannot access certain features.

“The limitations are discouraging,” said Mr Matsekh, who helped develop a Watch app to control a Tesla Model S without involvement from the electric carmaker.

The challenge he believes is “not trying to take a phone app and cram it into a Watch.”

Rabo is developing an app called “Revere,” that ties notes to calendars. The Watch will recognise the wearer is walking into a meeting and pull up previously dictated notes about the attendees, for instance.

Apple listed about 40 apps on its website as it unveiled its smartwatch on Monday with “thousands” more in the works, it said.

Watch apps showcased by Apple so far are mostly extensions of services like Uber, American Airlines and Twitter.

“People are playing it pretty safe and right now just extending their application,” Ryan Taylor, design director at Normative Design, the software firm hired by Rabo. Once the Watch is released, it will be easier to develop, he said.

Mr Taylor points out that there has been no “killer app” so far on Android smartwatches that have been on the market for two to three years.

What Apple is “trying to do is get people to think of apps differently than an iPhone app. That cultural shift is taking a little bit more time and that’s OK,” he said.

5 The plan to tackle Ireland’s housing crisis has failed