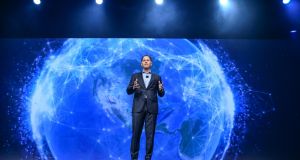 Staff at both tech companies worldwide have been on shaky ground for almost a year since Dell chief executive Michael Dell (above) announced, in October 2015, plans to purchase EMC Corporation for a record $67 billion. The deal was finally closed in September on the biggest tech acquisition in history.

Alabama Shakes were a fitting choice for the live music act performing at the first Dell EMC World technology conference, which kicked off on Tuesday night at the Austin Convention Centre in Austin.

Staff at both tech companies worldwide have been on shaky ground for almost a year since Dell chief executive Michael Dell and Co announced, in October 2015, plans to purchase EMC Corporation for a record $67 billion. The deal was finally closed in September on the biggest tech acquisition in history.

Speculation that up to 200 workers might be laid off at EMC’s facility in Cork – where the global data-storage and cloud-computing specialists employ more than 2,000 people – thankfully turned out to be a little on the extreme side after a spokesperson for the company confirmed on Tuesday that the number of Irish job losses, in the wake of the merger, would be closer to 50. Combined, both Dell and EMC Corporation employ about 5,500 people in Ireland.

While staff for the two firms elsewhere in the world still have reason to be tense, Michael Dell is probably feeling more relaxed than he has in quite a while. While he has demonstrated many times in the past he’s good under pressure, the successful acquisition of EMC Corporation was quite a feat. Buying back his own company from shareholders in 2013 was a bold move, but since then he has had more opportunities to use what has now become his signature line: “Go big or go home, baby.”

The purchase of EMC, a company recently described as a “Byzantine federation of wholly and partially owned subsidiaries” has put Dell right at the heart of the kinds of markets in business hardware, software, cloud storage, security, etc, that Dell has had his eye on since the decline of the personal-computer empire he built.

That debt will, in the short term, be serviced by cutting costs elsewhere in the business. Staff in areas such as marketing, supply chain and general administration – where there is already considerable overlap between the two firms – will likely be the first to get the chop.

But it will not stop there. All sorts of cost-cutting exercises will be needed. One employee from Dell corporate headquarters, which is located on the outskirts of Austin, who was attending the conference disclosed to The Irish Times plans by his employer to sell a number of the building units on its main campus over the coming months.

“The long-term aim is to have as many Dell staff as possible working from home,” the source said. “That’s the way things are going across the tech sector. Most of the staff here – myself included – are delighted by the prospect of getting to work from home. But some of the old guard in more senior positions at company HQ aren’t as enthusiastic.”

Dell employs about 11,000 people in Round Rock alone, the small city – about 50 miles from the Texan state capital – that the tech giant has called home since 1996.

Worldwide the newly-formed Dell Technologies will employ somewhere in the region of 140,000 people. It was inevitable job cuts would also result from a deal that big.

Last month, various media reported total job cut figures to be between 2,000-3,000, principally in the United States. Those who control the flow of information in and out of Dell Technologies are tight-lipped on the details.

“While job reductions are never our first alternative and we strive to minimise them, in a merger of this size they are necessary given some overlap in functions,” said Dave Farmer, vice-president of public relations for Dell. “We expect that revenue gains will outweigh resulting cost savings, with revenue growth driving future employment. No further details, such as geographic location, are being provided.”

The structure at the top of Dell Technologies will still contain many of the same faces who were central to the running of both firms prior to the merger. A total of 14 executives, including three from EMC reporting directly to Michael Dell, will continue to run “big-picture” operations. The decision to keep many of the key executives from EMC in place comes as no surprise though as too many drastic changes at the top could threaten the delicate web of smaller subsidiaries that EMC has somehow managed to stay on top of.

The merging of the two companies is also already showing some signs of increased innovation and synergy. If they can wow the tech world with a few game-changing product launches this week, particularly in the cloud-computing space, as well as highlight the significant economies of scale expected from the merger a couple of years down the road, then Dell and Co should be able to maintain enthusiasm for the acquisition.

That’s what the next two days in Austin are all about. Aside from feeding, watering and entertaining the thousands of staff, press, analysts and tech enthusiasts who have all made their way to the “live music capital of the world” for the three-day event, announcements, unveilings and launches of new products and services for the data-storage, server, virtualisation, end-point data-security and cloud-enabled data-protection markets are expected. And a crowd like this will scream far louder for data-storage innovation than they ever would for Alabama Shakes.