Galway businessman says he is not seeking Pentagon ‘sweetheart’ deal 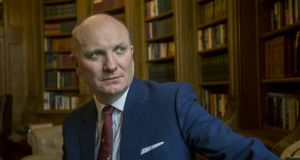 Businessman Declan Ganley: CNN reported that Republican strategist Karl Rove, an investor in Mr Ganley’s company, is behind the alleged White House attempt to give the contract to Rivada. Photograph: Brenda Fitzsimons

Rivada Networks, a US-focused telecoms network company founded by Galway businessman Declan Ganley, has submitted its interest to the American government for a potential multibillion dollar contract to build a 5G network on US department of defense spectrum.

Mr Ganley told The Irish Times he is “absolutely confident” his company would win any tender for the spectrum. But he insisted that he “wants to go into the ring and win it” in a competition. He denied a report on Tuesday on US network CNN that suggested the administration of US president Donald Trump is pressuring defence officials to award Rivada a contract without holding a competitive tender.

CNN reported that Republican strategist Karl Rove, an investor in Mr Ganley’s company, is behind the alleged White House attempt to give the contract to Rivada, whose directors include former chairman of the joint chiefs of staff, Gen Richard Meyers, and Martin O’Malley, a Democrat and former Maryland governor.

Mr Ganley insisted the story has emerged as part of a partisan political battle as the US presidential election enters the final stretch.

“There is no shred of truth in that story. It has never been true. The raw truth of it is that in the last two weeks of an election, everything is about the election,” Mr Ganley said last night.

He said if CNN does have a source that has told it that there is an attempt to gift Rivada a non-bid contract, then “the source is lying and no proof of the claim exists, because the claim is not true”.

Mr Ganley claimed that even if Rivada was offered a no-bid contract, it “would never take it”.

“We want to win it fair and square. If we got a sole source contract in the US, people elsewhere would say it was a sweetheart deal because we knew somebody. We will win it. I am absolutely confident of that. But I want to go into the ring and win it.”

The department of defense last month put out a call for expressions of interest in the valuable spectrum with a deadline of Monday this week. Mr Ganley confirmed Rivada had submitted an expression of interest.

He also noted that its bitter commercial rival, AT&T, owns CNN, the network that ran the alleged no-bid contract story.

“It is important to understand that AT&T sees Rivada as an existential threat. CNN got played,” he said.

The CNN report by its high-profile chief Washington correspondent, Jake Tapper, said “untold billions are at stake” with the contract.

Despite an on-the-record denial from Mr Rove that he was involved in any such campaign, CNN reported on Tuesday that its “informed sources” said the White House, prompted by Mr Rove, is “unquestionably pressuring the Pentagon to approve what would likely be, in the words of one senior administration official, the biggest handoff of economic power to a single entity in history”.

CNN reported that the Pentagon was resisting the alleged move.