DCU Alpha to grow the number of start-ups it supports 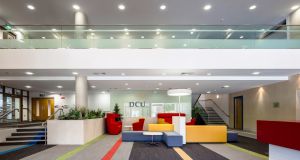 DCU Alpha is a nine-acre, 200,000 square feet office, laboratory and industrial research facility based 800m away from the main Dublin City University campus.

DCU Alpha, a commercial innovation campus that promotes the growth of research-intensive businesses, has announced plans to grow the numbers of start-ups it supports to over 100 over the coming years.

The announcement comes as Irish start-up Neosfar, an Internet of Things solutions provider, said it is to establish a new R&D facility at the centre, announced the creation of 30 new jobs. NIIT, an Indian digital learning technology firm, also said that DCU Alpha will be its new European base.

The centre, which was formerly known as DCU Innovation Campus, currently hosts more than 30 companies, which between them employ 350 people. Established in late 2013, DCU Alpha said it now intends to ramp up the number of businesses it backs by more than double the amount envisaged for it in the Government’s Action Plan for Jobs.

The centre said that within three years it intends to be supporting over 100 companies and 800 jobs.

DCU Alpha is a nine-acre, 200,000 square feet office, laboratory and industrial research facility based 800m away from the main Dublin City University campus.

The site was originally established as the Institute for Industrial Research and Standards (IIRS) and was most recently formerly occupied by Enterprise Ireland along with SEAI and NSAI.

It is now home to over 30 companies working on next generation of technologies across cleantech, machine-to-machine communications, sensor tech, wearables, ICT, Industrial automation and connected hardware.

Among the firms based at the centre are multinationals such as Siemens, Veolia, Fujitsu and VSP Global, and high potential indigenous start-ups such as Shimmer Sensing, Novaerus and Exergyn.

DCU Alpha is home to Ireland’s only dedicated hardware hackathon space and will soon be home to TechShop - which is billed as the world’s foremost commercial ‘makerspace’ and rapid prototyping facility.

“Today’s announcement that DCU Alpha plans to grow to 100 companies and 800 jobs in the next three years is a huge boost for the north side, and a great indication of what is possible for start-up companies with access to the right supports,” said Minister for Jobs Richard Bruton.