Cyber Monday continues to spread to all of December

The rather dull and predictable reality is that it is Thanksgiving weekend in the US, plus the entire month of December, that has gone “cyber” and sales-focused 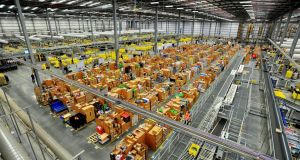 The warehouse at the Amazon fulfillment centre in Hemel Hempstead gets ready for Cyber Monday. Online sales on Black Friday were massive this year, only marginally trailing Cyber Monday at $2.7 billion in the US.

A decade ago, when the internet was in a fast-growth phase but online shopping lagged significantly behind in-store shopping, a US businesswoman, Ellen Davis, had an idea.

The biggest in-store shopping day of the US calendar was so-called Black Friday – the Friday after the annual last Thursday in November Thanksgiving holiday – when retailers often tip into the black for the year in revenue. Online retailers wanted to get a slice of that post-pumpkin revenue pie.

A trend had already emerged for online sales to spike the Monday after Thanksgiving, attributed to employees returning to work and faster internet connections.

At the time home broadband was only just overtaking dial-up in US homes, with less than a third having broadband. So it made sense to many to wait until work on Monday and then burn up time shopping on the net on their employer’s nickel.

Davis, who is vice-president of the National Retail Federation, saw a marketing opportunity and came up with the term Cyber Monday, which has been with us ever since.

It was quickly adopted internationally, perhaps making more sense for non-US online shoppers than the concept of Black Friday, so strongly associated with a holiday nobody else observes.

Many of us will have clicked our way through websites in search of deals on this year’s Cyber Monday, which took place this week (even though most such deals last at least all week).

According to software maker Adobe’s Digital Index, which tracks sales across 4,500 websites including 80 per cent of all online transactions from the top 100 US retailers, this was the biggest Cyber Monday yet with $3.07 billion in sales in the US alone. That’s a 16 per cent rise over last year.

The index also recorded the steady consumer transition to using mobile devices for purchases. Some 26 per cent of sales, $799 million, were made on mobile devices. Mobile sales made via an Apple device running the iOS operating system greatly outpaced Google’s Android devices, with iOS garnering $575 million of those sales, and Android, $219 million.

Purchases made by iPhone exceeded those made by iPad, at $343 million versus $233 million. On Android, the split was $179 million on phones versus $41 million on Android tablets.

Cyber Monday is not generally the biggest day for online sales. This year it might just be – those were record figures on Monday – but it seems just as likely that the biggest sale day will fall somewhere later in December, the usual trend.

In the first five years of official Cyber Monday sales it never was the biggest day. Generally it came in seventh or ninth, though it was the second biggest day in 2009, according to figures on those years from data tracker ComScore.

Online sales on Black Friday were massive this year, only marginally trailing Cyber Monday at $2.7 billion in the US, according to Adobe. Retailers such as Target made a major effort to offer discounts online in a challenge to big internet retailers such as Amazon.

Thanksgiving day itself saw a record $1.7 billion in sales, reflecting changing US attitudes towards shopping on the actual holiday. Many bricks and mortar retailers now open on Thanksgiving, a change bemoaned by many.

The main takeaways from all of this are that Black Friday is fading as a key shopping day (total sales for Black Friday were $10.4 billion, down 10 per cent on last year). Purchases are moving online steadily, year on year. Cyber Monday is just part of that growth but not “the biggest day”, as widely reported each year.

The rather dull and predictable reality is that it is Thanksgiving weekend in the US, plus the entire month of December, that has gone “cyber” and sales-focused, leading up to the gift-giving holidays.

Gee. What a surprise.

1 Michael Smurfit: ‘I asked Trump to invite me to the White House for my 80th birthday’
2 Small businesses are cannon fodder in zealous anti-virus experiment
3 Ryanair expects air fares to fall when flights take off again
4 Irish business of Carluccio’s restaurants to be wound up
5 ‘I’m so lucky to be in the Caribbean – a million miles from Derry Girls’
Real news has value SUBSCRIBE