CurrencyFair to take on banks with business service 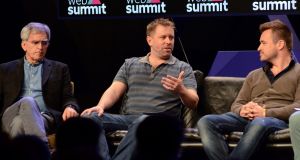 Brett Meyers (centre) says getting the imprimatur of Which? was a boost for his company.

Dublin-based startup CurrencyFair is setting its sights on the business market, aiming to take on the banks when it comes to performing business transactions.

The company was recently named the cheapest service for transferring money abroad by Which? magazine, which looked at the cost of transferring £10,000 (€13,141) to a euro account abroad and moving £1,000 into US dollars.

CurrencyFair was compared against eight banks, money transfer services such as the Post Office and MoneyCorp, and rival startup TransferWise. CurrencyFair came out top for transferring £10,000, ahead of TransferWise, with the banks coming in last.

Founder Brett Meyers said the firm is planning to push ahead with business services in the coming weeks, promoting its priority transfer service that will allow businesses to move money more quickly.

The transfer time for currency using CurrencyFair’s standard service is usually one to two business days. That’s quicker than banks, the company says, and is enabled by having accounts in local currency around the world.

Business customers have always been a feature of CurrencyFair’s service, with Mr Meyers pointing out that one of the first transfers on the service was done by a business.

CurrencyFair is among the new wave of startups taking on the banks to provide a cheaper, faster way to transfer money than going through the banks. Key to that goal, Mr Meyers said, is being transparent about the costs. CurrencyFair charges around €3 to transfer £10,000 on its standard service, but fees can work out cheaper if customers are prepared to use the firm’s peer to peer currency exchange marketplace and wait for a better deal.

Getting the Which? backing was a boost for the company, Mr Meyers said, with it providing independent evidence that the service can save users money.

1 Election 2020: Parties' pledges on housing simply don’t add up
2 Britain after Brexit will not be alone, but it will be lonelier
3 Marlet snaps up 1.8 acre Sandyford site for €17m
4 First-time buyers drive growth in mortgage values and volumes
5 Banks withdrawing from ATMs – another failure of regulation
Real news has value SUBSCRIBE