‘Cult of the start-up’ behind fintech revolution

Fintech firms face compliance issues as they mature, despite millenials trusting them 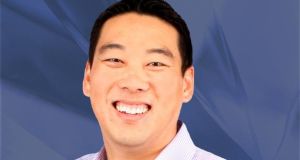 Rick Yang, a partner with New Enterprise Associates: “If you look back 10 or 20 years ago, people thought of their banks as secure, stable brands, but I think that’s really flipped now.”

Young people trust tech firms more than financial institutions and would rather visit the dentist than interact with their bank, a leading Silicon Valley fintech investor told delegates at an event in Dublin earlier this week.

Rick Yang, a partner with New Enterprise Associates (NEA), which has helped more than 200 companies go public, said it was start-ups rather than banks that were seen as trustworthy brands now.

Mr Yang, whose previous successes include Chicago-based payments gateway Braintree, which was acquired by PayPal for $800 million in 2013, said those who had grown up during the recent economic downturn were wary of traditional financial players.

“Consumer expectations have completely changed,” he said. “If you think of millennials, most of these folks graduated college during the financial crisis and had a tough time finding jobs, were buried in student debt and witnessed the Occupy Wall Street phenomena.

“Many of them trust tech firms more than they do financial institutions,” he added. “If you look back 10 or 20 years ago, people thought of their banks as secure, stable brands, but I think that’s really flipped now.”

Amy Neale, who leads MasterCard’s Start Path Global programme, which sees the company partnering with new firms to develop the next generation of commerce, payment and fintech solutions, said the “cult of the start-up” was a key reason why fintech firms were proving attractive to millennials.

“The point of interaction has shifted. It is no longer about bank branches,” she said. “In fact, there have been studies that show that many younger people don’t even necessarily know what a bank branch is.”

Mr Yang said many fintech start-ups were achieving success because they were able to operate in a grey area in terms of regulation, whereas incumbent players had become heavily regulated following the financial crisis.

“I think this has opened up doors for start-ups to disrupt legacy companies,” he told attendees at Enterprise Ireland’s first Silicon Valley Investment and Innovation Forum, which was held on Tuesday.

Also appearing at the event, Scott Case, head of global private equity services with Silicon Valley Bank, which has funded more than 20,000 start-ups since it was established in 1982, said that while tech firms had been able to gain a foothold by operating in a regulatory grey area, this was beginning to work against them as they matured.

“There’s so much regulation now that we’re getting to the point where we can’t bank start-ups because they cannot pass the various regulatory schemes,” Mr Case said. “We’re getting to a level of maturing in the start-up sector where they need to stop boasting about how they are so different. They need to find some middle ground where they have built enough of a compliance structure that they can interface with the banking community more generally.

“We’ve left the ‘dirtbag’ start-ups phase and, for them to be part of the broader economy, they need to start playing by the rules,” he added.

1 Fianna Fáil may have just pressed the pause button on the property market
2 Who are Ireland’s 17 billionaires?
3 Are there annual limits on inheritances or gifts to a child?
4 My father in a nursing home wants to gift me his house
5 O’Flynn company ‘mistakenly’ got go-ahead for Birmingham project
Real news has value SUBSCRIBE