Comreg to meet telcos amid row over fault repair times 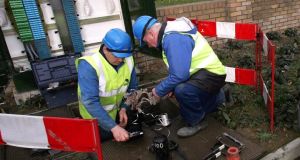 Telecoms regulator Comreg will meet representatives of the State’s main telecoms groups next week amid an escalating row over fault repair times on the broadband and fixed phone line network.

Sky, Vodafone, BT and Magnet claim Eir’s fault repair times are too long and are below European industry norms, hindering their ability to operate in the Irish market.

The chief executives of these companies lodged a joint complaint with the regulator late last year on foot of a report by Towerhouse consultants, which flagged concern about Eir’s repair times.

Eir, which operates the State’s main telecommunications network, has a number of service-level agreements (SLAs) with companies that use its network.

They oblige the former semi-State to fix 77 per cent of faults on customers’ lines within two days and 92 per cent within five days.

The company admits, however, it is currently not hitting its SLA targets. It insists the matter is being addressed and that financial penalties are paid to operators when targets are not met.

“ComReg will give an update to Sky, Vodafone, BT and Magnet in relation to the matter raised by Towerhouse on behalf of the aforementioned companies. Eir will also present,” a spokesman for regulator told The Irish Times.

As part of the process, ComReg will make recommendations on new levels for SLAs at the end of March, which all sides have agreed to abide by.

Separately, Comreg is examining complaints that Eir is abusing its dominant position in the telecoms market by discriminating against other firms using the network.

In a report last summer, Eir detailed a list of 20 areas where it was failing to provide equal access to non-Eir companies.

ComReg, however, says it will not be in a position to respond to the complaints until the end of this year, having outsourced a review of the wholesale telecoms market in Ireland to consultants on the grounds of limited resources.

Eir, however, claims that it has addressed many of the issues involved and plans to publish a compliance update at the end of March, detailing its progress.

Access to Eir’s broadband and fixed-line network remains a contentious issue amid allegations that Eir favours its own retail arm over rival telcos.

In other jurisdictions, former state monopolies have been structurally separated to ensure that their retail and wholesale work independently.